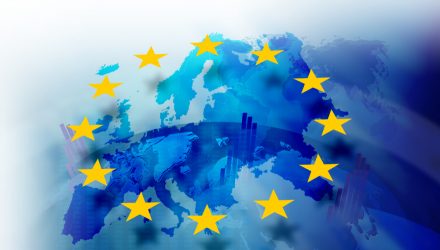 An Alternative ETF Strategy to Hedge Against Weakness in Europe

As the European market outlook dims, traders can turn to a bearish exchange traded fund strategy to bet on further pain in this region of the world.

European equities slipped to a more than one-year low on Thursday after slowing Eurozone business activity fueled growth concerns, and German shares were especially hit hard after the country triggered the “alarm stage” of its emergency gas plan, Reuters reported.

An S&P Global survey revealed Eurozone business growth slowed significantly and by much more than many had previously expected as consumers deferred purchases to save money in face of rising energy prices. A PMI covering the bloc’s dominant services industry slipped to 52.8 from 56.1.

“There was this underlying expectation that services are still doing well. The PMI’s poured some cold water on that belief,” Andrea Cicione, head of strategy at TS Lombard, told Reuters.

“Until central banks get some signal to pivot towards a more dovish stance, the market will continue to focus on downside risks to growth,” Cicione added.

Demand for manufactured goods also declined at the fastest rate since May 2020, when the coronavirus pandemic first began to spread, and headline factory PMI dropped to a near two-year low of 52.0 from 54.6, compared to expectations of a modest drop to 53.9, Reuters reported. Meanwhile, an index measuring output, which feeds into the composite PMI, also decreased to 49.3 from 51.3, the first sub-50 reading in two years, reflecting a contraction.

“Inflows of new business have stalled, led by a slump in demand for goods and reduced demand for services from cash-strapped consumers in particular,” Chris Williamson, chief business economist at S&P Global, told Reuters. “At the same time, business confidence has fallen sharply to a level rarely seen prior to the pandemic since the region’s economic contraction during 2012, hinting at an imminent downturn unless demand revives.”

Against this type of backdrop, Ray Dalio’s investment management firm Bridgewater Associates has built up a $10.5 billion bet against European companies, almost doubling its position in the past week to its most bearish against the region’s stocks in two years, Bloomberg reported. Bridgewater’s current bearish position is the highest since the firm held a $14 billion against European companies in 2020 and before that, a $22 billion bet in 2018.

Investors who are also worried about potential weakness in Europe can look to alternative ETF strategies to hedge the risks, such as the ProShares UltraShort FTSE Europe (EPV), which tracks the -2x or -200% daily performance of the FTSE Developed Europe All Cap Index.