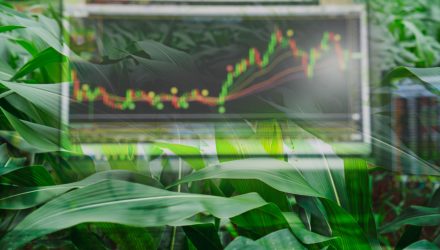 Will April Pain Lead to May Gain for Commodities?

COVID-19 continued to wreak havoc across commodities markets in April. The S&P GSCI fell 9.67% in April and 47.92% YTD. Economic data continued to weaken into uncharted territory. Supply chains crucial to the flow of commodities from extraction to consumption experienced a sudden shut off and demand collapsed. Energy and agriculture underperformed, while metals offered some green shoots.

With the collapse of front-month oil prices on April 20, 2020, the full effect of the oil supply glut was revealed. Market historians can now add negative oil prices to the list of unprecedented market events of 2020. Demand disappearance, diminishing storage capacity, and physically settled May WTI crude oil contracts produced a perfect storm for energy-related commodities. Global energy demand could slump by 6% in 2020 due to the restrictions placed on transport and industrial activity in what would be the largest contraction in absolute terms on record, according to the International Energy Agency. Compounding the hit to price levels that the COVID-19 pandemic has had on demand, oil output from OPEC was the highest since March 2019. OPEC+ production cuts are expected to take effect from the start of May 2020. After falling 54.72% in March 2020, the S&P GSCI Crude Oil dropped another 40.69% in April 2020. Crude oil volatility spiked to all-time highs as the weakness was felt across all oil products.

The S&P GSCI Industrial Metals rose 0.96% in April, reversing some of the downside seen in March. Copper and nickel were both supported by China restarting production facilities that had been on lockdown, as well as supply chain disruptions.

With elevated levels of volatility across assets, the S&P GSCI Gold rose 6.03%, outshining all other commodities and demonstrating its safe-haven status during times of market uncertainty. According to the World Gold Council, investment demand for the yellow metal rose 80% in Q1 2020 compared to the same quarter last year, which offset a 39% fall in jewelry demand.

The S&P GSCI Grains fell 6.25%, with weakness seen across the board. The S&P GSCI Corn underperformed the most (-7.60%) due to its correlation to energy in the ethanol space. The dramatic increase in demand for grocery store food items could not offset the historic lack of demand for ethanol. Cocoa, cotton, and coffee reversed their divergent performance from the prior month. After a strong March, the S&P GSCI Coffee dropped 11.87% in April. After double-digit declines in March, the S&P GSCI Cotton and S&P GSCI Cocoa both advanced 11.56% and 7.12%, respectively.

The S&P GSCI Livestock dropped 5.15% in April. Millions of pounds of meat are expected to be missing from the U.S. supply chain as several major meat producers shut down plants and slaughterhouses. Meat shortages at grocery stores are expected in the near term, as farmers face the likely culling of herds because they will not have anywhere to sell their livestock to be processed. In April, it was estimated that nearly a third of U.S. pork processing capacity was offline.