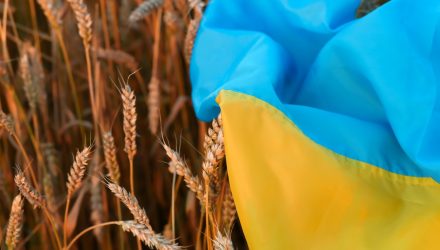 A wheat-related exchange traded fund is plunging Wednesday after the U.S. Department of Agriculture reported on a bigger-than-expected stockpile, despite the Russia-Ukraine war that threatened to disrupt global supplies.

According to the latest USDA report, the overall impact from the war on global grain supplies was relatively subdued, with world wheat ending stocks slightly higher due to a larger-than-expected Australian crop, Bloomberg reports.

Following the supply update, Wheat futures retreated after hitting a multi-year high in the previous session. Wheat prices were still up over 50% since the start of 2022.

Bigger shipments from Australia and India could offset the lower estimates from Russia and Ukraine.

Russia also indicated on Tuesday that it could restrict trade of some raw materials, but Moscow did not specify which ones. The Russian prime minister warned that the country should secure its own wheat supplies to feed its own people before considering exports.

Russia’s position is also fueling a wave of protectionism across Asia and Europe in the wake of Moscow’s invasion against Ukraine, which could further add to global supply concerns. For instance, Moldova, Hungary, and Serbia banned grain exports while Indonesia controlled its edible oil shipments. According to the Associated Press, Ukraine has prohibited some exports to ensure food.

“Huge speculative interest has flowed into wheat that may have pushed futures past reasonable levels,” CHS Hedging said. “The export market is difficult to define with many countries banning exports and tenders being canceled.”