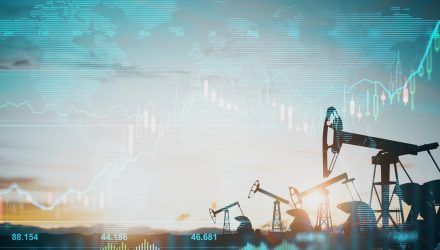 Oil-related exchange traded funds have surged this year, with crude oil prices topping $130 per barrel for the first time since 2008, but we shouldn’t expect U.S. shale oil producers or so-called frackers to do anything to pressure pricing any time soon.

American shale drillers warned that there are limits to how much and how quickly they can raise oil production after Russia’s invasion of Ukraine and Western sanctions triggered a spike in prices, the Wall Street Journal reports. U.S. producers are pointing to ongoing hurdles like supply-chain issues, investors who are wary of overspending, thinning inventories, and other problems that will constrict growth.

“They’ve already got all of their available equipment out there already,” Richard Spears, vice president at energy consulting firm Spears & Associates Inc., told the WSJ. “The constraint on growth is going to be, where do you get another [fracking]truck?”

Oil executives have highlighted a wariness of overspending on projects after investors were burned in previous years when drillers gave priority to expanding their businesses over profits and lost billions of dollars in the process.

Additionally, some highlighted the flight of capital from fossil fuels in recent years, notably with increased rhetoric for combating climate change and the shift away from dirtier energy sources. Consequently, U.S. oil patches are left without enough fracking equipment to bring new wells online.

Meanwhile, any rapid expansion in drilling would deplete energy producers’ most valuable drilling locations without guarantees that prices would remain elevated.

“It’s a 10-year-old business. There’s only about a 10-year inventory of shale drilling locations left, maybe 15,” John Hess, chief executive of Hess Corp., told the WSJ. “People are going to be more judicious about how they accelerate in this emergency situation.”

Looking ahead, Scott Sheffield, chief executive of Pioneer Natural Resources Co., said his company, the largest oil producer in the Permian Basin of West Texas and New Mexico, will likely stick to its plans on long-term oil production increases by 0% to 5% per year.

“We have shortages of labor, sand, and equipment, and it’s going to take a good 18 months just to ramp it up,” Sheffield told the WSJ of the industry. “If it’s a long-term problem, U.S. shale can respond and help the world, but it’s going to take time and a lot of caveats.”