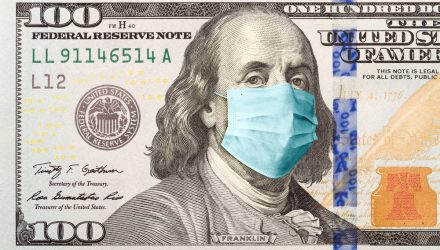 A U.S. dollar-related exchange traded fund continued to weaken Friday, with the greenback dipping toward a seven-month low.

The Invesco DB US Dollar Bullish (NYSEArca: UUP) dropped 0.4%. Meanwhile, the Dollar Index (DXY), which tracks the USD against a basket of its peers, was down 0.3% to $99.3970, hovering around its weakest point since January 7 and suffering its fourth consecutive weekly loss.

The U.S. dollar has depreciated over 8% since its March peak when safe-haven investors piled into the greenback during the height of the global market selling due to the coronavirus outbreak, Bloomberg reports. Looking ahead, some strategists warn of an extended period of weakness in the U.S. currency.

Investors have trimming exposure to the USD due to negative real rates in the U.S., the Federal Reserve’s accommodative policy to support the U.S. economy, and the U.S. government’s huge stimulus measures that have inundated the market with cash. Furthermore, increasing tensions between Washington and Beijing, a resurgence in Covid-19 infections across the United States, and a spike in jobless claims are also weighing on the dollar.

“There is considerable medium-term support for a view that the dollar is in the early stages of a big picture turn” lower, Alan Ruskin, Deutsche Bank AG’s chief international strategist, told Bloomberg. “The magnitude of the turn will be determined” in part by how many iterations of easing the Fed has to go through to gain traction.

The dollar was also under pressure this week after the euro currency strengthened from the European Union’s landmark deal for a 750-billion-euro, or $871 billion, economic recovery fund.

Furthermore, many traders are turning to the traditional safe-haven Japanese yen as a safer defensive play in response to any sudden global volatility spikes. The yen currency was also climbing against all its major peers on Friday as well.