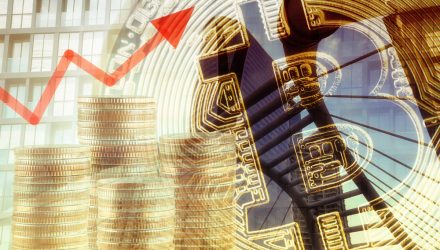 Bitcoin is on a jaw-dropping ascent, one that places it among the year’s best-performing assets. For the seven days ending Dec. 16, the dominant digital currency is higher by 21.40% and after recently breaking through $20,000, Bitcoin traded over $21,600 on Wednesday evening.

It’s not uncommon for one year’s leading assets to lose that leadership status in the following year, but some market observers believe much more is on the way for Bitcoin in 2021.

“Bitcoin is likely to have another ‘record-breaking year’ in 2021, with prices expected to rise 50% and possibly double with its current momentum, believes the boss of one of the world’s largest independent financial advisory and fintech organizations,” said deVere Group CEO George Prior in a note out Wednesday.

The largest digital currency by market value has plenty of critics, but it doesn’t lack for supporters. In fact, new data suggest high net worth individuals are growing fond of cryptocurrencies.

Bitcoin Still in the Early Innings

Bitcoin has sometimes been referred to as “digital gold,” with supporters suggesting it could be a good safe-haven investment. However, the cryptocurrency has tended to trade closer to equity markets in recent times and has been plagued by massive volatility, which has either made investors fortunes or crushed them.

“Inevitably, we will soon see some pullback on prices and more volatility as traders sell Bitcoin at record high prices,” said Green. “This is especially true as the market is heavily influenced by so-called ‘whales’, major investors who hold lots of the digital currency and can therefore have a major impact on prices when they buy or offload.”

Integral to the case of expanded acceptance and use of digital assets is conveying value properties to investors. This can be by measuring intrinsic or monetary value. Bitcoin represents freedom at a time when so many governments are actively increasing capital controls. Although a pullback is likely and even natural for the cryptocurrency following this stellar run, that doesn’t mean upside from here is limited.

“However, these lower entry points can be good for smaller investors to increase their exposure to cryptocurrencies,” said Green. “Indeed, it could prove to be particularly beneficial as Bitcoin is, I believe, likely to have another record-breaking year in 2021, with prices expected to rise 50% and possibly double with its current momentum.”