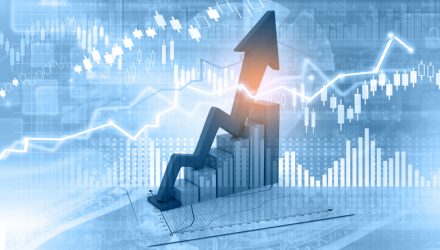 This Commodities ETN Benefits If China And U.S. Make Nice

On news that trade tensions between the U.S. and China are flaring up again, it wasn’t surprising to see the iPath Series B Bloomberg Copper Subindex Total Return ETN (NYSEArca: JJC) trade lower on Tuesday.

That scenario could easily reverse and do so in significant fashion if the world’s two largest economies can resist tariff urges and finally come to a trade agreement.

“Low inventories across the copper supply chain mean that any resolution to the U.S.-China trade war could trigger a snap rally in prices as consumers rush to restock, market participants said on Tuesday,” reports Reuters. “Combined stocks of on-warrant copper in London Metal Exchange and Shanghai exchange warehouses have declined 50.5% since mid-August metal buyers have slowed replenishment rates.”

Many also look to the base metal as Dr. Copper or a gauge for the global economy since the metal is a major component in many various industries.

The recent gains in copper has been a stark contrast to the 20% drop off over summer when fears of global trade wars between the U.S. and China heated up, the Wall Street Journal reports. China makes up almost half of all global demand for copper.

“Declines in warehouse stocks are often seen as a sign of robust demand in the main industrial demand centers for the metal, used in construction and power industries,” according to Reuters. “But low stocks also reflect a risk reduction strategy by consumers who have switched to making hand-to-mouth purchases that avoid building any inventories not already ordered by a customer, delegates at an LME conference in Singapore said.”

Related: With Trade Tensions Lingering, Tread Carefully With This ETF

Furthermore, copper traders have taken a more optimistic outlook on hopes of thawing relations between the U.S. and China as talks between top officials resumed ahead of a meeting between leaders later this month. Swing traders may be affecting current prices in the copper market.

“But the current lack of certainty over how the tit-for-tat spat will play out is making traders cautious about making new purchases,” notes Reuters.