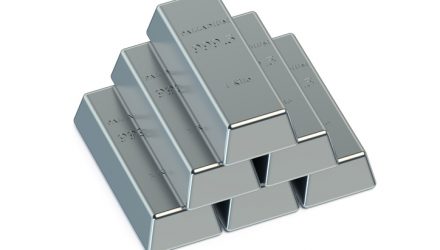 The 2020 Palladium Push Is Already On

After soaring more than 50% to rank as one of 2019’s best-performing commodities ETFs, the Aberdeen Standard Physical PalladiumShares ETF (NYSEArca: PALL) is building on those gains in 2020 with a year-to-date gain of almost 27%.

Car catalyst demand jumped over the past couple of years due to stricter emissions regulations across Europe and China’s plans to toughen standards in a bid to reduce smog. Catalytic converters help diminish toxic emissions and produce carbon dioxide, water, and nitrogen.

“Prices swung between gains and losses on Monday, after surging to a fresh record of $2,577.27 an ounce as tight supply conditions show little sign of easing. The metal pared some of its gains in the afternoon as a holiday in the U.S. depressed activity in most major markets,” reports Bloomberg.

U.S. markets were closed Monday for the Martin Luther King, Jr. holiday, but PALL jumped almost 6.1% on volume that was quadruple the daily average last Friday.

Looking ahead, the constrained supply could further support prices, but carmakers could also look to alternatives. Bank of America Merrill Lynch analysts warned that carmakers could struggle to find more palladium in the next few years as global supply is set to remain flat at about 10.2 million ounces.

Unlike platinum, the other white metal platinum, which as part of catalytic converters for diesel engines, palladium has benefited from a positive demand outlook that analysts expect to persist as governments around the world aim to meet rising environmental conservation goals. Often overlooked in PALL’s 2019 rally is just how long palladium has been cruising higher.

Palladium “is in a ‘real sweet spot’ of recovering industrial production globally, higher purchases from the auto sector, and constrained mine supply, said Wayne Gordon, executive director for commodities and foreign exchange at UBS Global Wealth Management,” according to Bloomberg.

The return to lower interest rates around the world has continued to support demand for physical assets, which tend to exhibit an inverse relationship to interest rates since investors are less apt to hold non-yield-generating raw materials when bonds offer higher yields in a rising rate environment. Other fundamentals are supporting the palladium market, too.