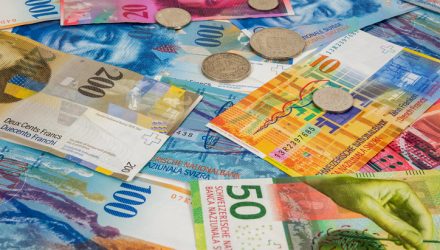 When it comes to safe-haven assets, U.S. investors often think of the dollar, Treasuries, and gold. Another asset with safe-haven status is the Swiss franc, accessible for ETF investors via the Invesco CurrencyShares Swiss Franc Trust (NYSEArca: FXF).

While still in the red year-to-date, FXF has rallied considerably off its May lows and is up 1.65% this month. However, some market observers believe the franc’s recent rally could be running out of steam.

“The currency fell for a second day Wednesday after data showed that the Swiss National Bank’s sight deposits, seen as an early indicator of its intervention, jumped last week in the second consecutive sizable increase,” reports Bloomberg. “Furthermore, an escalation in the U.S.-China trade war now appears better priced in, potentially reducing the haven bids that helped the franc beat all major peers in the past three months.”

Investors Worried About Losing Their Safe-Haven

Global economic weakness, especially with risks out of China and potential yuan currency devaluations, have kept investors up at night. Now, more are growing anxious over the so-called Brexit vote or upcoming U.K. referendum on European Union membership, as recent British polling results show a rising percentage are in favor of a break from the E.U.

The hard currencies are typically used to fund trades of more risky assets due to their low-interest rates, along with their stable government and financial systems. On a technical basis, the franc is looking like it could decline against the euro, its primary rival. FXF measures the Swiss currency against the dollar.

“Against the franc, the euro completed a bullish candle chart pattern Tuesday, the so-called Morning Star, after it met support from its trend channel since May on Monday,” reports Bloomberg. “Momentum studies are on the verge of sending a reversal signal while options traders are already positioned for the risk of a stronger Swiss currency, possibly leaving little room for further allocations.”

For traders looking for near-term catalysts for FXF, the Swiss National Bank meets in September, and that central bank could take action to stem the franc’s strength. This means FXF could be ready to decline in advance of that meeting.