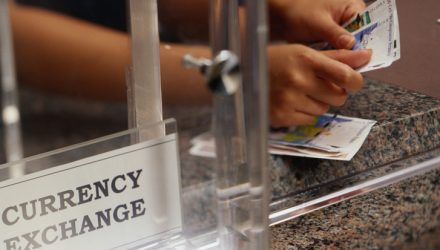 Currency ETFs are reflecting investors’ uncertainty in the face of heightened volatility after China’s decision to let its yuan currency break through a key level in response to an escalating trade war with the U.S.

On Monday, Beijing allowed its yuan to break above the 7 per dollar level for the first time in 11 years, which many interpreted as a direct response to President Donald Trump’s threat of additional tariffs, Reuters reports.

China’s willingness to allow its currency to offset the impact of a year-long trade spate is seen as a new step in the ongoing trade war. A major world economy is prepared to throw in its currency as a tool to respond asymmetrically to the U.S.’s trade levies, potentially opening up the foreign exchange market to new catalysts of volatility, especially if it encourages other countries to follow suit.

“This is the formal introduction of currencies into the trade war,” Richard Benson, head of portfolio investments at foreign exchange asset manager Millennium Global, told Reuters. “If anything, it had been currency stability that was used within the trade war. Now this is an overt, explicit move by the Chinese in response to Trump’s tariffs.”

After the announcement, the winners and losers were coming out.

Emerging market currencies that are closely tied to globalization and the flow of trade were also among the heaviest hit. The WisdomTree Emerging Currency Strategy Fund (NYSEArca: CEW), which provides exposure to U.S. dollar moves against a diversified basket of emerging currencies, pulled back 1.3% and crossed below its long-term support at the 200-day simple moving average.