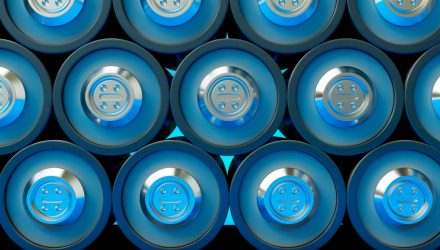 The Global X Lithium & Battery Tech ETF (NYSEArca: LIT) could perk up over the near-term thanks to some encouraging comments from Chilean lithium giant SQM, the world’s second-largest lithium producer.

“Chile’s SQM (NYSE: SQM), the world’s second-largest lithium producer, achieved record second-quarter output levels and saw sales volumes soar on renewed optimism about long-term demand for the metal used in the batteries that power electric vehicle batteries and high-tech devices,” reports Cecilia Jasmine for Mining.com. “The company said it is now producing at record levels of roughly 70,000 tonnes for the year, which has allowed it to build higher levels of inventory ahead of an expected demand boom.”

As demand for electric vehicles and the batteries that power them continue to rise from more environmentally friendly consumers, something like the Global X Lithium & Battery Tech ETF may continue to capture the growth opportunity. LIT tracks the Solactive Global Lithium Index, which is designed to measure broad-based equity market performance of global companies involved in the full lithium cycle from mining and refining the metal, through battery production.

“SQM also sold more lithium in the three months to June 30 than in the first quarter, delivering 12,600 tonnes of the white metal, up 45% from the January-March period,” according to Mining.com.

Due to the increased concerns over environmental issues, global governments are supporting the development of electric vehicles worldwide. Consequently, the high voltage battery market will continue to enjoy increased interest and investments as electric vehicles is expected to drive the growth.

“While the company expects demand in 2020 to be similar to 2019, it remains optimistic about long-term demand growth because of increasing expectations for car sales, EV penetration rates, and continued government incentives,” notes Mining.com.

As the world looks to decarbonize and rely less on fossil fuels, this will help feed into more strength for alternative energy sources like electricity. That, in turn, will fuel more growth in lithium-ion cell manufacturing, which is expected to quadruple by the year 2030, according to a new report by Wood Mackenzie.

LIT is higher by almost 38% this year, making it one of the best-performing materials ETFs.