You are at:Home»Alternatives Channel»Some Political Support for Rare Earths ETF 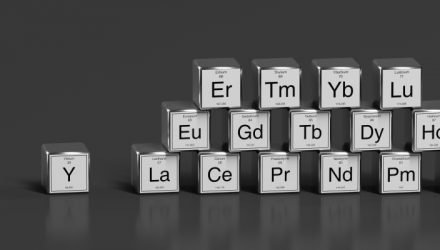 The VanEck Vectors Rare Earth/Strategic Metals ETF (NYSEArca: REMX) could be getting some help from the Trump Administration.

For years, the global rare earths industry has been dominated by Chinese exports while U.S. production slumped due to stringent regulations.

Rare earth metals are crucial factors in the 21st century, as they are a part of industries as disparate as electronics, mobility, and sustainable energy. Strategic Metals include rare earth elements as well as specialty metals used in nuclear reactors, LEDs, magnets, electric motors, sensors, and many other components used in smartphones, flatscreens, hybrid vehicles, and our homes. Now they are becoming available for physical investment, including secure storage in bonded warehouses.

“Critical minerals have been a focus of the Trump administration. The White House has signed agreements with Canada and Australia, among other nations, to secure supply of minerals needed for a range of modern life’s aspects, including electric vehicles (EVs), green technologies and military applications,” according to Mining.com.

Increased production in the U.S. is important because the Defense Department is trying to stockpile reserves of these minerals in an effort to reduce dependence on Chinese imports.

“Last year, the White House ordered the Defense Department to boost production of rare-earth magnets used in consumer electronics, military hardware and medical research, amid concerns China would restrict exports of the products as trade tensions between the countries grew,” reports Mining.com.