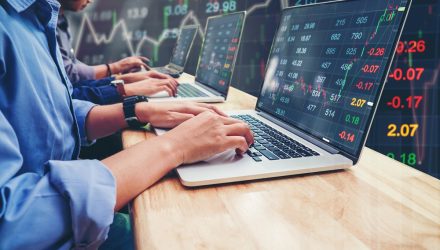 With stocks recently trading near all-time highs, but struggling to hold at those levels, many investors are wondering what the market holds for them in the future. Technical analysts, or those who use charting patterns to trade the markets, have noted one potentially ominous pattern recently in small cap stocks: the death cross.

Like its name sounds, the death cross is a technical chart pattern indicating the potential for a major selloff.

Some experts are unfazed by the technical analysis harbinger however.

“Well listen, death crosses don’t really factor much into our process. They do sound very scary, but I don’t know. It kind of seems to me that by the time you start talking about them, it’s looking in the past at what’s already happened,” said Ari Wald, head of technical analysis at Oppenheimer on CNBC.

Still, Investopedia claims that, “The death cross indicator has proven to be a reliable predictor of some of the most severe bear markets of the past century: 1929, 1938, 1974, and 2008. Investors who got out of the stock market at the start of these bear markets avoided large losses that were as high as 90% in the 1930s. Because a death cross is a long-term indicator, as opposed to many short-term chart patterns such as the doji, it carries more weight for investors concerned about locking in gains before a new bear market gets underway. An increase in volume typically accompanies the appearance of the death cross.”

Although he acknowledges its importance, Wald gives an alternative explanation for the possible warning sign, stating, “It’s really not about small cap underperformance. It’s really been about large cap outperformance. The fact that small caps are lagging, I don’t think it is a worry, but they do have to participate. They have to stay afloat.”

Mark Tepper, president at Strategic Wealth Partners, tends to agree with Wald, stating that the timing of small-cap frailty is a key indicator for the broad market.

“If we were three years into a bull market, and small caps are underperforming like this, I’d be really concerned. But we’re almost 11 years in, so I’m not as worried because this is what happens. Small caps tend to underperform in the later innings of these long secular bull markets,” Tepper said during the same segment.

For investors looking at how to protect portfolios during times of market declines could consider an ETF like the AGFiQ US Market Neutral Anti-Beta Fund (BTAL), which in general, is inversely correlated with baskets of stocks like the S&P 500.