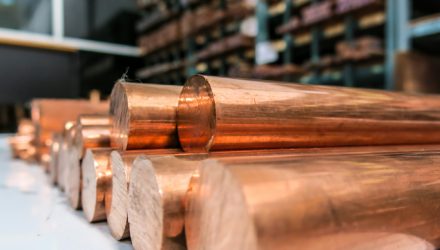 The iPath Series B Bloomberg Copper Subindex Total Return ETF (JJC) is sporting a second-quarter loss of 10% as a slew of weaker-than-expected global economic data points are pressuring copper.

Most copper today though is used in building construction, power generation and transmission, electronic product manufacturing, and the production of industrial machinery and transportation vehicles.

“The price of copper was hammered on Wednesday amid mounting worries about the impact of a trade war between the world’s two largest economies and a global slowdown in manufacturing,” reports Frik Els for Mining.com.

Predictably, some of the data points concerning copper market observers come courtesy of China, the world’s second-largest economy and the biggest buyer of the red metal. Copper prices have been stuck in a rough patch this year, weakening on escalating tensions between the U.S. and China and softening global growth.

“China’s official PMI figures also slid below 50 last month with the employment sub-index tumbling to its lowest level in more than a decade. With the country consuming nearly half the world’s copper, the price of the red metal is closely correlated with domestic factory conditions,” according to Mining.com.

“According to a new World Bank report, the value of global trade for 2019 has been revised down a full percentage point, to 2.6% — slightly below the pace observed during the 2015-16 trade slowdown and the weakest since the global financial crisis,” notes Mining.com.

ETF investors can also gain exposure to the metals and mining space through miner-related ETFs, such as the SPDR Metals & Mining ETF (NYSEArca: XME), which is designed to track the broad metals and mining segment, and the Global X Copper Miners ETF (NYSEARCA: COPX), which takes a more focused approach to copper miners.

For more on alternative strategies, please visit our Alternatives Channel.