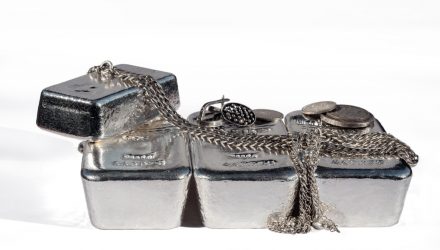 Silver Gets a Boost From Gold, But Encounters Headwinds

While gold markets have been buoyed by tensions in the Middle East, little brother silver rallied during the trading session on Monday, only to find headwinds near its highs.

Gold futures on Monday notched their loftiest settlement since April of 2013, in the wake of the killing of top Iranian military commander, Qassem Soleimani. The news has echoed through financial markets, momentarily uprooting the desire for riskier assets and driving investors into traditional safe haven assets like gold.

“When I see this endless buying for gold it makes me think for the first time people are just saying, ‘I’m really fearful,’” said Jim Cramer on CNBC. He pointed out that the gold buying began even prior to Thursday night’s U.S. drone strike in Iraq that killed Soleimani as he was leaving Baghdad’s airport. Soleimani had been in charge of a special forces unit of Iran’s Revolutionary Guard.

However, some analysts see impediments to the argent metal’s rally.

“Silver markets rallied a bit during the trading session on Monday, breaking above the trend line momentarily that I had been talking about previously. That being said, it ran into a bit of a brick wall at previous resistance not only there, but just above. It looks as if silver is going to struggle going forward, but I’m not necessarily looking for some type of major breakdown. I believe at this point traders will continue to look for value, so a pullback will probably be welcomed,” explained Christopher Lewis, analyst at FXEmpire.

A similar trend could be in the works for gold as well say experts, as often significant price rallies result in consolidation or sizable pullbacks.

“History shows that a big spike up in prices amid higher volatility tends to produce near-term market tops sooner rather than later, after that initial spike up,” said Jim Wyckoff, senior analyst at Kitco.com. “That means in the coming days the gold market could put in a ‘near-term’ top that will last for a moderate period of time.”

As long as economic and geopolitical instability continue to rule, there may be more significant precious metals involvement.

“It is more of anticipation of what could happen or what might happen (between U.S. and Iran), which is now reflected in the market. Basically the uncertainty that we don’t know what is going to happen,” said Julius Baer analyst Carsten Menke. “If this issue is something which remains in the political area, like back and forth accusations and threats, then we should not have a lasting impact on gold.”