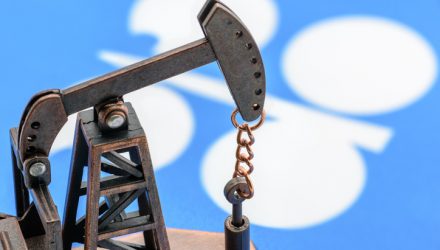 Refiners ETF Could Get a Lift From OPEC Price Support Efforts

The Organization of Petroleum Exporting Countries (OPEC) is looking to trim oil output in a bid to support prices, a move that could lift oil-related exchange traded funds, such as the VanEck Vectors Oil Refiners ETF (NYSEArca: CRAK).

CRAK tracks the MVIS Global Oil Refiners Index. That index “is a rules-based, modified capitalization weighted index intended to give investors a means of tracking the overall performance of companies involved in crude oil refining which may include: gasoline, diesel, jet fuel, fuel oil, naphtha, and other petrochemicals,” according to VanEck.

“The production cuts by OPEC+, an expanded coalition of oil-producing nations that includes Russia and Mexico, are unlikely to eliminate the production glut, Goldman Sachs analyst Brian Singer writes, because of the continued growth in U.S. oil production,” reports Avi Salzman for Barron’s.

Refiners have been boosting buybacks and dividends in recent years, trends that are expected to continue going forward.

“Goldman expects WTI oil to trade around $50 to $60 and Brent to trade at $55 to $65 in 2020—not a disaster for oil stocks, but not exactly a tailwind either. Some stocks can still do well under those conditions, however,” according to Barron’s.

Looking ahead, the U.S. Energy Information Administration (EIA) cut its forecasts for 2019 world oil demand growth and U.S. crude production in light of the growing trade tensions between the world’s two largest economies. Trade tensions also weighed on the energy market Wednesday after U.S. President Donald Trump said he was pushing back a trade deal with China.