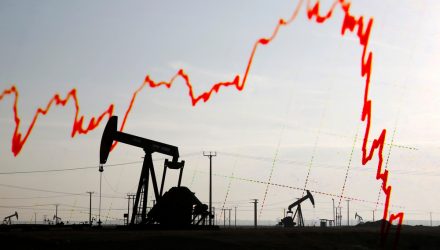 For much of this year, the Energy Select Sector SPDR Fund (NYSEArca: XLE) and rival equity-based energy ETFs were under duress as oil prices sank due in large part to waning demand, a scenario hastened by the coronavirus pandemic.

In a stunning reversal of fortune, it now appears that as the U.S. economy reopens and thanks to a spate of supply cuts, oil demand could outpace supply later this year, potentially providing more upside for XLE in the process.

“Data released Wednesday by the Energy Information Administration showed that oil inventories declined for the second straight week,” reports Avi Salzman for Barron’s. “On Tuesday, the EIA predicted that the buildup of oil inventories — caused by producers pumping too much oil that refiners don’t want to buy — will peak in the current quarter and then decline.”

“An increasing number of analysts now see oil demand exceeding supply in the second half of the year, a bullish sign for oil. That is a sentiment shift from a month ago when Wall Street was poised for a continuing oversupply that could keep prices low for more than a year,” according to Barron’s.

Crude oil prices exploded to the highest level since early April on Monday, on optimism related to oil output cuts and investors risking capital based on hoped that less stringent lockdowns will elevate the demand for fuel as workers begin to repopulate the economic landscape in offices across America and the globe.

With XLE up almost 22% over the past month, it’s clear production cuts are helping oil equities.

“And global production cuts have kept supply off the market, reducing global output by about 14 million barrels a day, or about 14% of normal production. During the most-restrictive phase of the lockdown, that wasn’t enough to reduce the oversupply. But now that people are driving again, the market is closer to being in balance,” according to Barron’s.