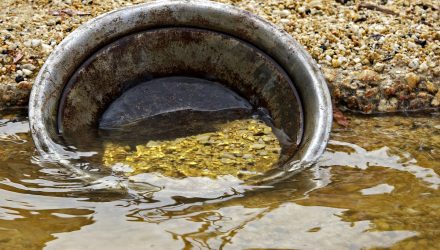 Powell Says No To Gold Standard

When gold was first discovered at Sutter’s Ranch in 1848, it inaugurated the Gold Rush to California. That movement helped unify western America. Then in 1861, Treasury Secretary Salmon Chase printed the first U.S. paper currency. As a rare metal, valued since ancient times, The Gold Standard Act established gold as the only metal for redeeming paper currency. It set the value of gold at $20.67 an ounce​.

According to Investopedia, “The gold standard is a monetary system where a country’s currency or paper money has a value directly linked to gold. With the gold standard, countries agreed to convert paper money into a fixed amount of gold. A country that uses the gold standard sets a fixed price for gold and buys and sells gold at that price. That fixed price is used to determine the value of the currency. For example, if the U.S. sets the price of gold at $500 an ounce, the value of the dollar would be 1/500th of an ounce of gold.”

While the gold standard is not currently used by any government (Britain stopped using the gold standard in 1931 and the U.S. followed suit in 1933, amidst the Great Depression, and abandoned the remains of the system in 1971 in favor of fiat currency), there is recent debate as to whether a return to the gold standard would be prudent, given the current economic conditions.

While many are in favor of a return the gold standard, Fed Chairman Powell weighed in on the matter in testimony today, soundly rejecting the idea.

“You’ve assigned us the job of two direct, real economy objectives: maximum employment, stable prices. If you assigned us [to]stabilize the dollar price of gold, monetary policy could do that, but the other things would fluctuate and we wouldn’t care,” Powell said from Capitol Hill. “We wouldn’t care if unemployment went up or down. That wouldn’t be our job anymore.”

“There have been plenty of times in the fairly recently history where the prices of gold has sent signal that would be quite negative for either of those goals,” he added. “No other country uses it,” he added. The Fed is tasked and overseen by Congress to maximize employment and keep prices stable.
Judy Shelton, a current Fed nominee tapped by President Trump has contrary feelings about the gold standard.
“If the appeal of cryptocurrencies is their capacity to provide a common currency, and to maintain a uniform value for every issued unit, we need only consult historical experience to ascertain that these same qualities were achieved through the classical international gold standard,” she wrote in 2018.
Ultimately, no matter how you feel about the gold standard, there is little debate that gold’s performance has been lustrous lately.
Leveraged exchange-traded fund (ETF) traders interested in gold can seek out funds like the Direxion Daily Gold Miners Bull 3X ETF (NYSEArca: NUGT). Additionally, short-term traders can also play the gold market through miners via the VanEck Vectors Gold Miners (NYSEArca: GDX) and the Direxion Daily Jr Gold Miners Bull 3X ETF (NYSEArca: JNUG).
For more gold news and strategy, visit our Gold Category.