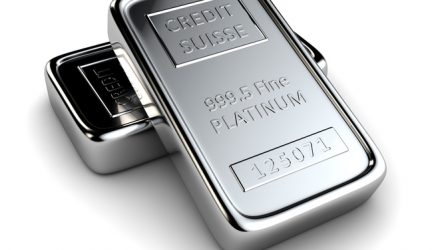 Platinum ETF Could Push Higher in the Second Half

The Aberdeen Standard Platinum Shares ETF (NYSEArca: PPLT) is up about 2% year-to-date. While that is obviously better than a loss, PPLT’s 2019 performance, to this point, has lagged behind those of comparable gold and palladium exchange traded funds. However, some commodities market observers believe platinum could bounce back in the second half of the year.

“Platinum continued to be the dog with fleas in the precious metals sector as the second quarter of 2019 came to an end on Friday, June 28,” according to Seeking Alpha. “A price correction in platinum is long overdue.”

Said another way, with respect to the other precious metals, platinum presents a value proposition for seasoned investors and beginning investors looking to shore up their portfolios with commodities.

“Platinum remains in a price funk compared to almost all of the other precious metals, except perhaps silver, but three reasons could lift the price out of its bearish trading pattern over the second half of this year,” notes Seeking Alpha.

Historically, platinum prices have exhibited a strong correlation to the South African rand currency – as the ZAR appreciates, the higher costs of production and lower U.S.-dollar-denominated platinum prices would put pressure on miners, causing slowdowns in production.

“Platinum is historically cheap when compared to palladium, rhodium, and gold. On July 5, the nearby August gold futures contract settled at $1400.10 per ounce creating a $588.70 discount for platinum under the price of the yellow metal,” reports Seeking Alpha.