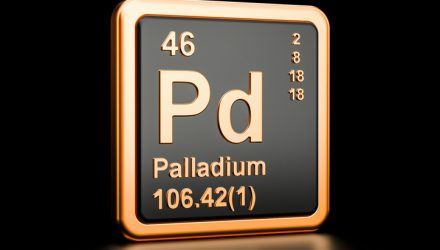 Although it stumbled early in the second quarter, the Aberdeen Standard Phys PalladiumShrs ETF (NYSEArca: PALL) remains higher by nearly 11% this year after ranking as one of 2018’s best-performing commodities exchange traded funds.

Some market observers believe palladium demand will be steady over the next several, potentially underpinning higher prices for PALL. Palladium is key component used by the car industry in catalytic converters fitted in petrol-powered vehicles to diminish harmful greenhouse gas emissions.

“The spot price of the metal is unlikely to rise significantly this year due to weakness in global light vehicle production, especially in China, United States and Europe,” said IHS Markit in a recent note.

“The demand for palladium is expected to remain strong in the near-term due to introduction of tougher vehicle emission norms and a marked shift in consumer preference from diesel to petrol (gasoline) engines―the auto industry consumes more than half of all palladium supply globally,” according to IHS Markit.

“According to Johnson Matthey’s ‘PGM Market Report’ published in May 2019, palladium demand from automotive recorded a new high of 8.72 million ounces, up 2% year-on-year (y/y), in 2018, even though there was a slight decline in global light duty gasoline vehicle production,” said Markit. “The company expects palladium demand to strengthen further this year due to rising loadings on European gasoline catalyst systems.”