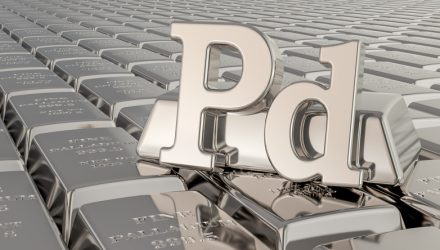 The Aberdeen Standard Phys PalladiumShrs ETF (NYSEArca: PALL) is up about 7% over the past month, an impressive showing relative to other precious metals ETFs, including those with exposure to platinum, palladium’s nearest rival.

“Palladium has outdone itself with an extended run to record highs that began at the start of 2018 and is continuing, with prices up about 40% this year. The gains have come even as sister metal platinum’s recent rally to a more than one-year high failed to hold,” reports Myra Saefong for Barron’s.

For its part, PALL is up about 32% year-to-date, easily making it one of the best-performing precious metals ETFs this year.

Some market observers believe palladium demand will be steady over the next several years, potentially underpinning higher prices for PALL. Palladium is key component used by the car industry in catalytic converters fitted in petrol-powered vehicles to diminish harmful greenhouse gas emissions.

“Palladium and platinum are used in catalytic converters, which help control harmful emissions from car exhausts,” reports Barron’s. “But palladium is primarily used in vehicles with gasoline engines, while platinum is used in those powered by diesels. Diesel represents a small portion of U.S. auto sales—only 2.9% of total vehicles sold in the second quarter, according to the Diesel Technology Forum.”

Related: Inside The Powerful Palladium ETF

This year, palladium supply will be in a deficit relative to demand for an eighth straight year. Conversely, rival platinum has had supply surpluses in recent years.

With more countries shifting away from diesel-powered automobiles, palladium and PALL could continue gaining at platinum’s expense.