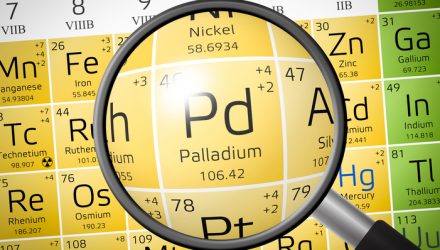 Palladium ETF Is on Fire And Can Continue Its Hot Streak

The Aberdeen Standard Physical PalladiumShares ETF (NYSEArca: PALL) is easily one of this year’s best-performing precious metals ETFs as highlighted by a gain of 54%. Palladium has traded higher for 16 consecutive days and PALL is up 14.56% this month.

PALL seeks to reflect the performance of the price of physical palladium, less the expenses of the Trust’s operations.

“Prices climbed for an unprecedented 16th day after signs of a breakthrough in the U.S.-China trade talks, fueling hopes for a rebound in the auto industry, palladium’s biggest consumer,” reports Bloomberg. “The metal that reached another record surged this week as mining disruptions in major producer South Africa threatened to tighten a market already hobbled by a persistent deficit.”

“The metal has gained more than 50% this year even as global car sales remain weak. Citigroup Inc. forecast prices could hit $2,500 next year,” according to Bloomberg. “Tight supplies, which have trailed demand since at least 2012, mean that autocatalyst makers are scrambling to get hold of the metal to meet stricter pollution rules.”

The return to lower interest rates around the world has continued to support demand for physical assets, which tend to exhibit an inverse relationship to interest rates since investors are less apt to hold non-yield-generating raw materials when bonds offer higher yields in a rising rate environment.

“South Africa, the world’s No. 2 palladium producer, expanded rolling blackouts to a record level earlier this week, disrupting miners’ operations. The situation has eased and most operations have returned to normal, although the country continues to experience power cuts,” according to Bloomberg.