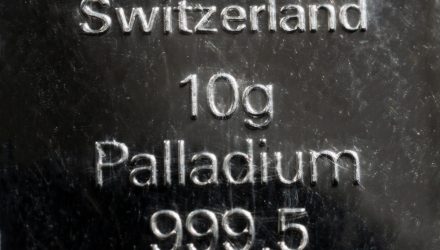 Palladium Will Hit the $2K Mark Before Gold, Analysts Say

While most were preparing for Thanksgiving dinner on Thursday, palladium investors were feasting off gains as the precious metal reached $1,841. Analysts are already predicting that the precious metal should reach the $2,000 price market ahead of gold.

“Palladium is the only one moving higher, which is bucking the trend a little bit, not only relative to gold but to industrial metals as well. Aluminum didn’t have a particularly good day this morning, neither did copper. And here’s palladium, just hitting record after record here,” TD Securities head of global strategy Bart Melek told Kitco News.

Even if gold makes a rally, Melek is predicting late next year that palladium will cross $2,000 per ounce first.

ETF investors who want to get in on the palladium action can look to the Aberdeen Standard Phys PalladiumShrs ETF (NYSEArca: PALL). PALL seeks to reflect the performance of the price of physical palladium, less the expenses of the Trust’s operations.

The fund is designed for investors who want a cost-effective and convenient way to invest in palladium with minimal credit risk. Based on Morningstar performance numbers, PALL is up 43%.