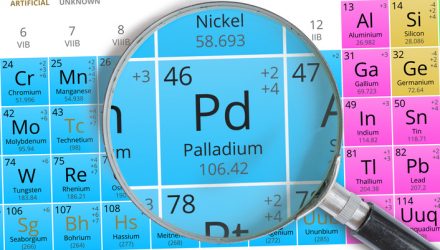 The Aberdeen Standard Physical PalladiumShares ETF (NYSEArca: PALL) traded lower Tuesday, a rare decline for what has been one of this year’s hottest commodities ETFs. With palladium residing the unprecedented price point of $2,000 per ounce, some market observers believe more upside could be in the offing.

PALL seeks to reflect the performance of the price of physical palladium, less the expenses of the Trust’s operations.

“Palladium has gained 57% this year, with market watchers saying the shortfall will be hard to fill. That’s great news for producers of the metal, used mainly in autocatalysts, which have seen their shares surge,” reports Bloomberg.

Unlike platinum, the other white metal platinum, which as part of catalytic converters for diesel engines, palladium has benefited from a positive demand outlook that analysts expect to persist as governments around the world aim to meet rising environmental conservation goals.

“Palladium has surged to unprecedented levels in 2019 as tighter emissions rules spurred demand, while supply hasn’t yet been able to respond. Citigroup Inc. forecasts the move upward now has the potential to see prices gain to $2,500 in the first half of next year. Power outages in major producer South Africa hurt mine operations this month, fueling gains,” according to Bloomberg.

With a lack of new supply coming to market, palladium prices could push even higher, benefiting PALL along the way.