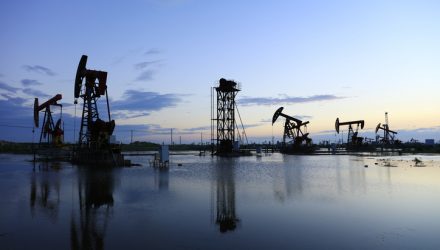 It has been a wild few days for oil exchange traded products, such as the United States Oil Fund (USO). After crude prices surged Monday following news that drones struck major Saudi Arabian oil assets, potentially knocking 5% of global daily supply out of the market, oil prices quickly retreated on Tuesday and Wednesday on news that the kingdom will be able to restore that lost supply in short order.

The attack came at an oil processing facility at Abqaiq and at a nearby Khurais oil field on Saturday, hamstringing 5.7 million barrels of daily crude production or 50% of the kingdom’s oil output. Saudi Aramco, the national oil company, reportedly is attempting to restore about one-third of its crude output, or 2 million barrels by Monday. However, Bloomberg News reported it could take weeks before Aramco restores the bulk of its production at Abqaiq.

USO, which tracks West Texas Intermediate futures, has been predictably active this week and some options traders have been stepping into the benchmark oil ETF.

“USO options traders have been piling on to the energy exchange-traded fund (ETF), too. During yesterday’s surge, roughly 445,000 calls and 230,000 puts were exchanged, eight times what’s typically seen in a single session. The September 11.50 and 12 puts, in particular, were active and were possibly used to initiate a long put spread,” according to Schaeffer’s Investment Research.

USO seeks to achieve its investment objective by investing primarily in futures contracts for light, sweet crude oil, other types of crude oil, diesel-heating oil, gasoline, natural gas, and other petroleum-based fuels. USO was up 12% at the end of Monday’s trading session.

In USO on Tuesday, “around 132,000 calls and 157,000 puts are on the tape, quadruple the expected intraday amount. The December 10.50 put has seen the most action, and it’s possible speculators are selling to open new positions here. Elsewhere, it looks like traders are buying to open September 13.50 calls, anticipating a rally up near its April peak by Friday’s close,” according to Schaeffer’s.