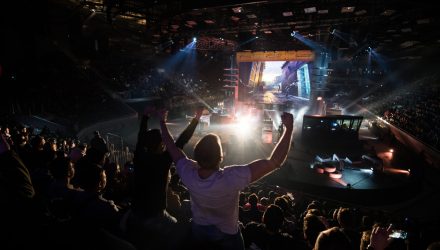 Up 82.44% year-to-date, the VanEck Vectors Video Gaming and eSports ETF (NASDAQ: ESPO) is proving the validity of the video game and esports investment thesis.

For investors that missed out on ESPO’s 2020 run, the good news is that the esports industry and related investment thesis are still in the early innings.

“It’s no wonder esports are worth roughly $1 billion in 2019 and being projected to grow 400% in the next seven years to $4.28 billion by 2027, according to Data Bridge Market Research,” writes AllStargg co-founder and CEO Nick Cuomo. “Some might say this is a conservative estimate with the global traditional sports market worth $388.3 billion in 2020 alone. With more than 2.7 billion gamers on earth, we’re barely scratching the surface of what’s possible for esports.”

There’s no denying the global outreach that Esports has had, especially now with the pandemic. Take the 2020 “League of Legends” World Championship gaming tournament for example:

“The 2020 “League of Legends” World Championship came to a close on Saturday, providing a triumphant if slightly muted exclamation point for the 10th season of one of the world’s most popular professional esports events,” an NBC News report said. “After starting with 22 professional teams from around the world, South Korea’s DAMWON Gaming defeated China’s Suning to take home the Summoner’s Cup and a share in the prize pool worth millions of dollars.”

Adding to the long-term case for ESPO is the fact that there are more than 2.7 billion gamers around the world and more than 10 million developers, confirming a robust long-term trajectory for the esports industry.