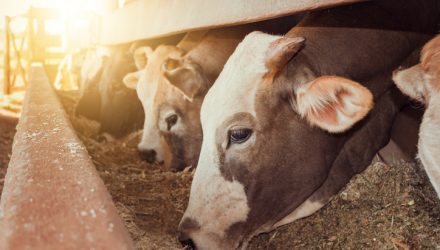 A livestock-related exchange traded note was among the best performers on Friday after the United States and China reached an initial trade deal that would cut tariffs and raise purchases on American farm goods.

The United States and China announced a “Phase one” agreement to reduces some U.S. tariffs in exchange for increased Chinese purchases of American farm goods in an attempt to end the 17-month trade war between the world’s two largest economies, Reuters reports.

The U.S. agreed to suspend new tariffs on $160 billion in Chinese goods that were previously scheduled to go into effect on December 15 and cut some existing tariffs to 7.5%. Meanwhile, China agreed to suspend retaliatory tariffs that would target goods ranging from corn and wheat to U.S. made vehicles and auto parts.

President Donald Trump tweeted Friday morning, “We have agreed to a very large Phase One Deal with China.” Officials in China have “agreed to many structural changes and massive purchases of Agricultural Product, Energy, and Manufactured Goods, plus much more,” he said.

Trump at the White House said he thought China, a major buyer of farm goods including soybeans and hogs, could purchase up to $50 billion in agricultural purchases.

“It’s surprising hogs were not up more, considering (that) they have reacted more strongly to this kind of news in the past,” Brock Associates analyst Doug Houghton told Reuters.

However, both countries were loath to provide details on the quantity of American farm products that China would purchase, with the office of the United States trade representative describing China’s commitment as “substantial,” the New York Times reports. The Chinese government did not provide precise figure either, stating only that purchases would rise by a “considerable margin” to meet the country’s needs for goods like soy and pork.