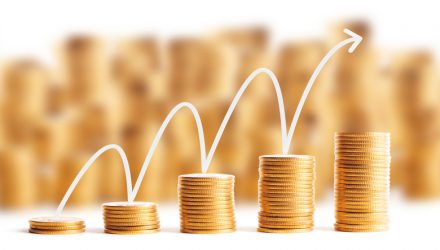 As global equity market volatility spiked in August, investors turned to a familiar safe-haven: gold. That trend sent billions of dollars worth of fresh inflows to gold-backed exchange traded products, such as the SPDR Gold Shares (NYSEArca: GLD) and the iShares Gold Trust (NYSEARCA: IAU).

“In August, global gold-backed ETFs and similar products had US$6.0bn of net inflows across all regions, increasing their collective gold holdings by 122t to 2,733t,” said the World Gold Council (WGC) in a note out Thursday. “Total holdings are 59t tonnes or 2% away from all-time highs of 2,791t, which occurred in late 2012 when the price of gold was 9% higher (US$~1,665/oz).”

“More broadly, gold-backed ETFs added 13% to their holdings over the past three months driven mainly by the decrease in global rates that has led to a slight yield curve inversion in the US 2y/10y Treasury curve—an inverted curve has historically preceded recessions (see Mid-year gold outlook 2019), as well as continuing geopolitical tensions between the US and China,” according to the WGC.

Investors have looked to GLD, IAU and related ETFs as a quick and easy way to gain exposure to gold price movements as they hedge against market risks, help protect their purchasing power in times of inflationary pressures or capitalize on increasing demand from the emerging markets with a growing middle-income class.

“From a currency perspective, the US dollar closed August near y-t-d highs, despite deteriorating economic conditions and market implications of additional central bank rate cuts this year. Gold is now at all-time highs in every major G10 currency except the US dollar and Swiss franc. It is nearly at an all-time high in Chinese renminbi,” according to the WGC.