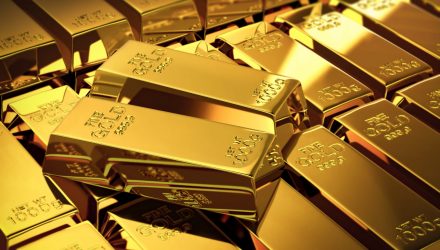 Investors have plowed into gold ETFs, with holdings in bullion-backed products surging to their highest level in six years over August, in response to the heightened uncertainty and market risks.

Investors bought a total of about 101.9 metric tons of gold through ETFs last month or about $5 billion in August, the Financial Times reports. Total ETF holdings went up to 2,453 metric tons, their highest level since February 2013, and it was the third consecutive month of net buying.

“The slowdown is happening; the question is does that end in a recession? And when do you think it ends in a recession? That is clearly one of the worries,” George Cheveley, a fund manager at Investec, told FT.

Brian Jacobsen, a senior investment strategist with Wells Fargo Asset Management, argued that some of the recent demand was prompted by a so-called terror-trifecta trade, or betting on a pullback in stocks along with a rise in gold and U.S. Treasuries.

“With all the troubles in the world, from US-China trade relations to the Brexit brinkmanship we’ve found a terror-trifecta trade to be pretty attractive,” Jacobsen told FT.

Looking ahead, investors now anticipate the Federal Reserve to continue its rate cuts in September to further bolster economic growth.

It is “just a question of how large this will be”, Jon Butler, an analyst at Mitsubishi Corp, the Japanese trading house, told FT. “This should continue to put downward pressure on bond yields and make gold look more attractive to investors, plus further escalations in the trade wars will help haven sentiment.”