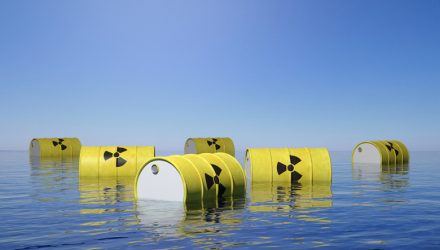 The Global X Uranium ETF (NYSEArca: URA), which tracks global uranium miners, continues scuffling, but there could be political help emerging for the fund.

Cuts In The Uranium Market

“Trump created the United States Nuclear Fuel Working Group in July to help U.S. uranium miners and nuclear industry struggling with foreign competition after he rejected a section 232 trade petition by two companies seeking quotas for domestic production. The group has met several times since its formation and is expected to detail its proposals by an Oct. 10 deadline,” according to Bloomberg.

Additionally, the industry may enjoy greater Chinese demand in the years ahead. The China National Nuclear Corp is investing in overseas uranium mines to secure supply for an expected power-up of China’s nuclear power generation, Reuters reported.

Policymakers are pushing the White House to lift mining restrictions in some uranium-rich areas of the U.S. and to expedite the permitting process.

“The lawmakers, including Alaskan Senate Energy Committee Chair Lisa Murkowski, said the group should lift access restrictions on uranium-rich areas of the country and expedite environmental reviews for mining projects – proposals that the Commerce Department had outlined when it named uranium a critical mineral in June,” according to Bloomberg.

Investors have pulled nearly $60 million from URA this year.