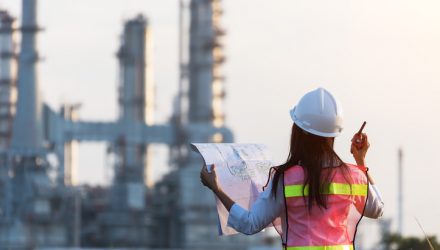 Energy sector ETFs were among the worst hit in the risk-off selling on Wednesday as crude oil prices plunged on an unexpected rise in U.S. crude inventories and a weaker global outlook.

“The report was mostly bearish, given the sizeable crude oil inventory build,” John Kilduff, a partner at Again Capital LLC, told Reuters. “It was also impressive that gasoline inventories rose, despite very strong demand on the week.”

Looking ahead, the EIA Tuesday cut its forecasts for 2019 world oil demand growth and U.S. crude production in light of the growing trade tensions between the world’s two largest economies that have crippled economic activity. Trade tensions also weighed on the energy market Wednesday after U.S. President Donald Trump said he was pushing back a trade deal with China.

The Organization of Petroleum Exporting Countries, along with their allies like Russia, have been limiting production by 1.2 million barrels per day to hep prop up the oil markets. However, Goldman Sachs argued that an uncertain macroeconomic outlook and volatile oil production from Iran and others could cause OPEC to extend the supply cuts.

“The sell off in recent weeks shows how vulnerable the market is and it may force Russia’s hand in extending the deal,” Warren Patterson, head of commodities strategy at ING, told Reuters.