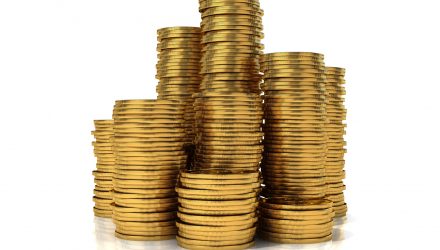 Ian Young February 20, 2020
Gold prices spiked over 1% Thursday as stocks fell from fresh all-time highs.
The shiny metal reached nearly $1,625 an ounce, the highest level in seven years, and has both investors and analysts excited about the prospect of moving back toward the elusive 2000 level that was nearly reached in 2011.
Frank Holmes, CEO, U.S. Global Investors, believes that gold could easily reach that level, given the current political and economic environment, which is wrought with volatility and instability. With a confluence of factors from low interest rates to foreign money printing, the gold bug sees rates moving higher in the foreseeable future.
“The DNA of the normal volatility of gold is is ushered by at least 20% over any rolling 12 month period. And for the past 20 years 80% of the time goal has been positive, which is very significant and there’s nothing for it when you go to 1600 for it to rally 20% from here. That takes it to 1900. And with all the money printing again we’re seeing now Greece, which was the basket case seven years ago, is all of a sudden offering rates of 1%. And they haven’t improved their economy to any great degree. All of Europe has once again negative real interest rates to try to spur economic activity. The 10-year government bond in the US is close to an all time low. The 30 year mortgage is only 30 basis points off the 2016 low. So I think that gold always rallies when rates start collapsing like this globally,” said Frank Holmes, on Kitco news.
Holmes also feels, like many experts, that the coronavirus will further encourage gold to rocket higher, giving that China continues to be hamstrung.
“There is no doubt that the fear trade of corona is showing up. Because corona, unlike SARS, corona is much more like 9/11, because of all the flights being canceled. A city like Huwan contained. That would be like containing all of Chicago. There’s great fear over what’s taking place. And all business has stopped in Huwan. And they say it’s because of all the bodies that have to go and be cremated. So all that negative news has no doubt made an impact on the fear,” he added.
Investors looking to use ETFs to play the gold market could look into the SPDR Gold Trust ETF (GLD) which is up 0.35% Thursday, or the VelocityShares 3x Long Gold ETN (UGLD) which was up over 1.10%, and are continuing their gains today.
For more market trends, visit ETF Trends.