You are at:Home»Alternatives Channel»Gold Projected to Beat the Market in 2020: CLSA 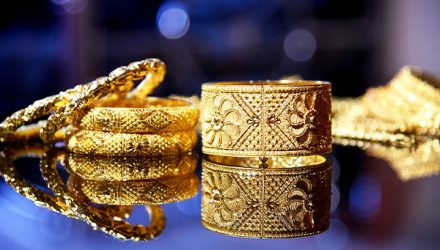 Gold Projected to Beat the Market in 2020: CLSA

Gold will outperform the S&P 500 Index in 2020. That’s one of several projections made by CLSA in its just-released “Global Surprises 2020” report.

The Hong Kong investment firm has an impressive track record when it comes to making market predictions—last year it had a 70 percent hit rate—so it may be prudent to take this one seriously.

I’ll have more to say on this in a moment. First I want to share with you an eye-opening conversation I had last week at Harvard Business School (HBS), where I’ve been attending the annual CEO Presidents’ Seminar and going over case studies involving Netflix, Amazon and more.

As you know, the coronavirus has disrupted day-to-day life in many parts of China and the surrounding region. That includes Hong Kong, whose economy is being served a one-two punch from not just the outbreak but, before that, the months-long protests.

I overheard that the Hong Kong protests go much deeper than a local spat between young college students and the police. Global forces have gotten involved and are actively financing the side they hope to see “win.”

A large number of the protesters, for instance, received training in Oslo, Norway—at the Oslo Freedom Forum—on how best to mobilize activists, keep ranks, deal with police and more. They returned to Hong Kong with a new set of strategies that perpetuated their demonstrations for months, until the coronavirus outbreak brought things to a halt.

Not only that, but the Hong Kong activists’ strategies are being embraced and mimicked by other demonstrators around the world, including those in Spain’s Catalan region. As some people said, young activists there, who seek independence from Spain, have lately copied many of the Hongkongers’ techniques, going so far as to march with umbrellas and occupy Barcelona’s international airport.

Of course, this level of organization and training requires financing from someone with deep pockets. Some believe it could be George Soros, who has a history of supporting similar civil movements around the globe through his Open Society Foundations.

At his annual dinner at the World Economic Forum (WEF) in Davos, Switzerland, the 89-year-old billionaire investor praised the Hong Kong protesters, telling attendees that it’s been a “most successful rebellion,” and that it has “the overwhelming support of the population.”

I don’t know if Soros is personally involved, but it’s worth reminding readers that back in 1998, he tried and failed to break the Hong Kong dollar’s peg to the U.S. dollar. Could he be trying the same right now? Again, I don’t know, but it raises additional uncertainty as well as the question of how much is happening behind the scenes.

That brings us back to gold. Writes CLSA’s head of research Shaun Cochran: “If investors are concerned about the role of liquidity in recent equity market strength… gold provides a hedge that could perform across multiple scenarios.”

Indeed, gold is one of the most liquid assets in the world with an average daily trading volume of more than $112 billion, according to the World Gold Council (WGC). That far exceeds the Dow Jones Industrial Average’s daily volume of approximately $23 billion.

The yellow metal, Cochran adds, can be particularly useful in an era of perpetually loose monetary policy: “[I]n the event that growth disappoints the market’s expectations, gold is positively leveraged to the inevitable policy response of lower rates and larger central bank balance sheets.”

As I’ve pointed out many times before, gold has traded inversely with government bond yields. The recent gold rally has largely been driven by the growing pool of negative-yielding government debt around the world, now standing at $13 trillion. Here in the U.S., the nominal yield on the 10-year Treasury has remained positive, but when adjusted for inflation, it’s recently turned negative, despite a strengthening economy. What’s more, the Federal Reserve’s balance sheet has begun to increase again. It now holds about 30 percent of outstanding Treasury debt, up from about 10 percent prior to the financial crisis.

I can’t say whether gold will beat the S&P this year or next, but what I do know is that the yellow metal has been a wise long-term investment. For the 20-year period through the end of 2019, gold crushed the market two-to-one, returning 451.8 percent compared to the S&P’s 223.6 percent. That comes out to a compound annual growth rate (CAGR) of 8.78 percent for gold, 4.03 percent for the S&P.

U.S. manufacturers started 2020 on stronger footing, a welcome turnaround after contracting for five straight months. January’s ISM manufacturing purchasing manager’s index (PMI) clocked in at 50.9, indicating slight growth. Up from 47.2 in December, this represents the biggest month-over-month jump since August 2013, when the PMI increased to 55.4 from 50.9 in July.

This may also mark the end of the recent manufacturing bear market, prompted by the trade war between the U.S. and China. Although relations between the world’s two biggest superpowers remain strained, to say the least, we’ve seen improvements lately that hint at better days. Both sides signed a “Phase One” agreement in mid-January, and last week, China announced it would be cutting tariffs in half on as much as $75 billion of U.S.-imported products.

The coronavirus is a new development that has disrupted global trade, but there’s reason to be optimistic, as the PMI makes clear.

To read my full comments on the coronavirus, and its impact on Chinese and Hong Kong stocks, click here!

The Dow Jones Industrial Average is a price-weighted average of 30 blue chip stocks that are generally leaders in their industry. The S&P 500 Stock Index is a widely recognized capitalization-weighted index of 500 common stock prices in U.S. companies. The Purchasing Manager’s Index is an indicator of the economic health of the manufacturing sector. The PMI index is based on five major indicators: new orders, inventory levels, production, supplier deliveries and the employment environment.

Compound annual growth rate (CAGR) is a business and investing specific term for the geometric progression ratio that provides a constant rate of return over the time period.