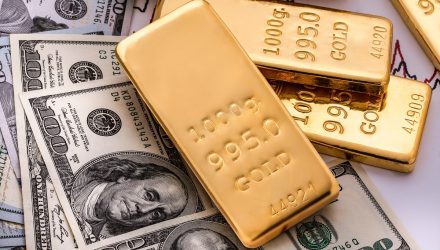 Investors are scrambling into gold, gold ETFs and other safe havens as market volatility continues to rile investors.

Spot gold has been rallying strongly to the upside for three weeks out of the past four, but met a wall at the highs of $1,524.10 from a low of $1,494.20. Futures, on the other hand, marked their highest finish since 2013 as investors feared a recession is looming, following disappointing data from China and the eurozone as well as news that the United States’ 2/10-year yield curves inverted for the first time since the Global Financial Crisis.

“The recent increase in gold prices may be set to continue on the strength of a global push for de-dollarization,” according to the analysts. More specifically, countries like Russia and China are looking to shy away from the U.S. dollar. “Countries increasingly hostile to the U.S. and dollar hegemony, such as Russia and China, are searching for alternatives to the dollar including gold,” the analysts add. “According to the World Gold Council, central banks purchased 70% more gold in Q1 of this year than during the same period last year, the most gold bought since Q1 2013.”

Gold has traditionally been a safe haven asset for investors, and as more fear creeps into the market this drives the shiny metal higher. The effect has been pronounced in both futures and ETFs, with a rally in both the SPDR Gold Shares (GLD) as well as Direxion Daily Gold Miners Index Bull 3X Shares (NUGT).

NUGT seeks a return that is 300% of the return of its benchmark index for a single day. The fund should not be expected to provide three times or negative three times the return of the benchmark’s cumulative return for periods greater than a day. NUGT has an expense ratio of 1.23% and is currently up 85.37% as of June 27, 2019.

“Many theories describe the causal mechanism between yield inversion and recession, but the key point is a lack of confidence in the current interest rate environment—specifically that yields will not be able to sustain their current rates over the long term,” Ryan Giannotto, director of research at GraniteShares, which runs the GraniteShares Gold Trust BAR, +0.60%  told MarketWatch.

“This rationale has profound implications for gold. Not only are interest rates expected to fall, but more importantly, a yield inversion signals substantial uncertainty about future expectations,” he said.