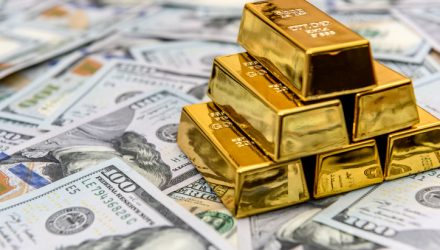 A new report from the World Gold Council (WGC) indicates demand for gold exchange traded products surged during the July through September period. In fact, demand for gold ETFs offset weakness in other areas of the gold market during the third quarter.

“A surge in ETF inflows (258t) outweighed weakness elsewhere in the market to nudge gold demand 3% higher in Q3. Although central bank buying remained healthy, it was significantly lower than the record levels of Q3 2018,” said the WGC in a report out Tuesday.

Investors rushing to GLD, GLDM and related ETFs as a quick and easy way to gain exposure to gold price movements as they hedge against market risks, help protect their purchasing power in times of inflationary pressures or capitalize on increasing demand from the emerging markets with a growing middle-income class.

“Holdings in gold-backed ETFs hit a new all-time high of 2,855.3t in Q3. Holdings grew by 258.2t during the quarter, the highest level of quarterly inflows since Q1 2016. Accommodative monetary policies, along with safe-haven and momentum buying, drove demand,” according to the WGC.

As rates in the U.S. have been falling and as the trade war with China rages on, more investors have been piling into alternative safe-haven assets like gold. As China’s economy starts to see tangible effects stemming from the trade war, more gold buying could be ahead—trade deal or no trade deal.

“he gold price rose by 5% during Q3, finding sustained support around US$1,500/oz. The primary factors behind this price momentum continued to be ongoing geopolitical tensions, concerns of a slowdown in economic growth, lower interest rates and the level of negative-yielding debt,” said the WGC.