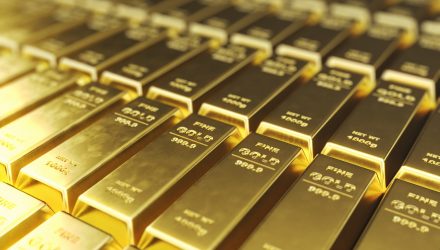 For example, investors yanked $620.7 million out of the SPDR Gold Shares (NYSEArca: GLD) on Friday, the most since October 2016, Bloomberg reports.

“It’s pretty directly related to the risk-on rally that we’ve seen in the market,” David Mazza, head of ETF product at Direxion Investments, told Bloomberg. “People who were hanging on to gold for protection took some of that off the table and seemingly have now moved back into risky assets for the time being.”

Gold prices have pulled back by over 6% since touching a six-year high in September after progress in U.S.-China trade talks, positive economic data and better-than-expected corporate earnings results helped increase investor appetite for riskier assets. The de-escalating stance between Washington and Beijing also fueled hopes that a trade deal would bolster the global economy. Meanwhile, fears of an imminent U.S. recession abated over the past month.

Comex gold futures were now trading around $1,464 per ounce, compared to around $1,560 back in early September.

Gold was slightly higher Wednesday on prospects of further Federal Reserve monetary policy intervention and the effects on inflation.

“Looking ahead, my colleagues and I see a sustained expansion of economic activity, a strong labor market, and inflation near our symmetric 2 percent objective as most likely. This favorable baseline partly reflects the policy adjustments that we have made to provide support for the economy,” Federal Reserve Chair Jerome Powell said in prepared remarks.

Nevertheless, Morgan Stanley analysts warned that positive trade talks and a rollback in the tariffs imposed by the U.S. and China against one another drag gold prices toward a bear-case projection of $1,394 per ounce for the first half of 2020. Nevertheless, a continued pullback in prices could bring back some value buyers back to the market, lending “some support to metal prices,” according to analysts including Marius van Straaten and Susan Bates in a note to clients.