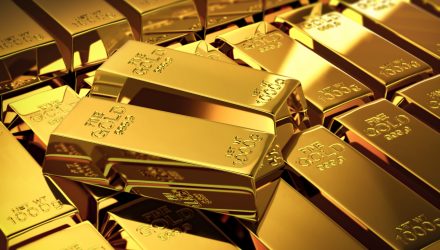 Gold ETFs Reap The Rewards of Stocks’ Dismal May

GLD, the world’s largest gold ETF, surged 2.43% in May as bullion topped $1,300 per ounce late in the month. Against the current backdrop of the U.S. trade war with China, and the fear and uncertainty that accompany the rampant volatility and the worst May selloff for stocks in 50 years now, gold prices will continue to rise this year, according to one financial executive.

“Gold jumped out of the gate on Friday, rising more than 1% in heavy volumes as investors seek a safe haven amid a widening trade war unleashed by US President Donald Trump,” reports Frik Els for Mining.com. “Gold for delivery in August, the most active futures contract, reached a high of $1,311.80 an ounce, the highest in seven weeks with 29m ounces changing hands in New York by lunchtime.”

A Strong Case For Gold

To its credit, dollar-denominated gold jumped in May even as the greenback rallied. The Invesco DB US Dollar Bullish (NYSEArca: UUP) added almost half a percent last month.

“Gold is seen as a store of value in turbulent times and the price of the metal usually moves in the opposite direction of the US currency. Gold is also finding favour as bond yields in the US fall and a rate cut in the world’s largest economy moves from possibility to probability,” according to Mining.com.

In the second half of May, investors added nearly $315 million to GLD.