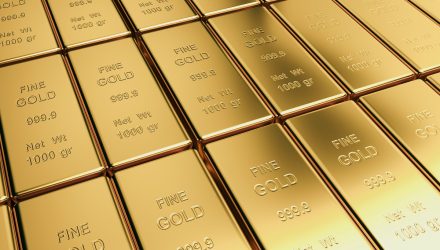 Gold Could Be In A New Bull Market, Say Experts

Gold prices jumped more than 1% to hit their highest level in over six years on Monday, while the Japanese yen and core government bonds also rallied.

Investors are reeling from the now sixth day of losses in the stock market, which is off 6% from its highs so far in that time, due to a raging trade war with China and unsatisfying Federal Reserve attempts to placate President Trump and investors.

While the U.S. abandoned the remnants of the gold standard back in 1971, investors have nevertheless flocked to gold in times of fear and uncertainty, seeking safety in the “haven” asset.

Gold futures are trading at a multi-month high on Monday with the precious metal being bid up by sinking Treasury yields, a weaker U.S. Dollar and a drop in demand for risky assets, as money flows out of stocks. The catalyst behind the move in gold is unfettered trepidation that an escalation of trade tensions behind the United States and China will accelerate the global economic slowdown and lead to a potential recession.

Making matters worse for stocks, while bolstering the case for gold, the Non-Manufacturing Purchasing Managers Index declined to a reading of 53.7% in July, marking the slowest growth since August 2016.

In addition to a technical chart breakout in the precious metal, all these economic and political factors working in unison are keeping gold in a strong position for upward growth.

“Traders and investors are spooked in late-morning trading Monday–probably the most unnerved they’ve been this year. Such is keeping gold and silver prices sharply up and near their daily highs,” said Kitco’s senior technical analyst Jim Wyckoff. “Worries about an extended and escalating U.S.-China trade war, unrest in the streets of Hong Kong, and U.K. Brexit concerns are combining to make it a big ‘risk-off’ trading day in the world marketplace.”

“I think we are in a sustained bull market now for gold and I think it can go way higher,” Philippe Gijsels, chief strategy officer at BNP Paribas Fortis, told CNBC’s “Squawk Box Europe” on Monday.

When asked whether he had a preference among the perceived safe-haven assets, Gijsels replied: “I prefer gold.”

“It is hard to argue that in the bond market you get a very nice price at the moment so, therefore, I think gold and silver look more compelling,” he added.

For those investors seeking a way to play the market using ETFs, the SPDR Gold MiniShares (NYSEArca: GLDM) and SPDR Gold Shares (NYSEArca: GLD), performed well in the second quarter and with the Federal Reserve lowering interest rates last Wednesday, the stage is set for more upside for gold ETFs.

Watch Below: Demand for Gold ETFs Increases to Diversify a Portfolio