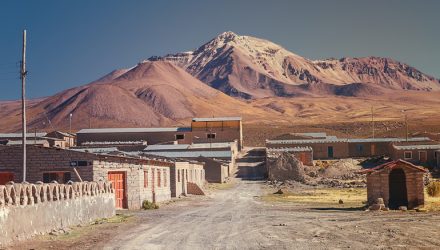 Long-running geopolitical unrest in Chile, the world’s largest producer of copper, has had some impact on copper prices and the iPath Series B Bloomberg Copper Subindex Total Return ETN (NYSEArca: JJC). For example, the popular copper ETN is up more than 4% in the current quarter.

Some market observers believe copper prices could see more upside as Chile’s Codelco, the world’s copper giant, could be forced to reduce output amid citizens’ protests.

“Codelco planned to spend $20 billion over a decade to modernize its aging mines and hold off a looming production slump,” reports Bloomberg. “But protests that have sent millions into the street to demand changes in everything from pensions and health care to education could jeopardize the state-owned miner’s push for needed government funding.”

Several months ago, copper hit a bottom-barrel two-year low as chaos was ensuing in equities. Due to copper’s widespread use, particularly when it comes to home building and commercial construction, it’s a good measuring stick of how well the economy is doing. Good news: sentiment toward the red metal is improving.

For its part, Chile’s Codelco faces some unappealing options.

“The alternatives are largely unappealing. The company could delay the work, but its costs for processing lower-quality ore from aging mines is growing,” according to Bloomberg. “It could boost borrowing, but its debt already sits at a record high. The bottom line: Without government funding, the company that now produces about 8% of global copper may soon find itself slipping from its top spot, according to Colin Hamilton at BMO Capital Markets.”

Another issue hampering Chilean copper output is that the protests are delaying talks regarding government funding for Codelco.

“President Sebastian Pinera’s center-right government earlier this year said talks on Codelco’s funding would start as soon as Congress passed a tax reform bill. But since the protests began on Oct. 18, bringing violence to the streets, there’s been no further discussion on Codelco’s needs,” reports Bloomberg.