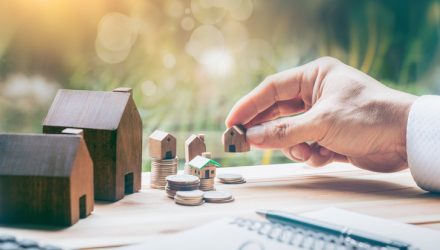 Finding Value and a Big Yield With a REIT ETF

Investors often turn to real estate investment trusts (REITs) and the related ETFs in search of above-average yields and defensive positioning, trades that often belie value in the asset class. However, the Global X Super Dividend REIT ETF (NasdaqGS: SRET) may be able to refresh that proposition.

SRET invests in real estate investment trusts (REITs), which gives real estate exposure to investors seeking that diversification of their portfolio through alternative assets. REITs are entities formed for the sole purpose of investing in real estate using pooled capital to purchase properties.

REIT rallied last year amid a favorable interest rate outlook, a catalyst that could again power SRET this year.

“In November 2018, the 10-year Treasury yield stood over 3.20% and a hawkish stance by the Fed led the market to believe rates would continue to climb higher. But policy changed just one month later, as the Fed reversed course and began cutting rates,” said Global X in a recent note. “Other major central banks followed suit. The European Central Bank (ECB) announced a fresh €20 billion a month stimulus plan, China’s People’s Bank of China (PBOC) announced its first loan rate cut in three years, and the Bank of Japan (BOJ) signaled openness to a rate cut.”

While data confirm real estate was a star performer at the sector level last year, valuations didn’t rise in a corresponding fashion.

“REITs benefited at an operational level, as lower interest rates allowed many to refinance their debt. As a result, REITs climbed 29% in 2019, but EBITDA growth only made up 2% of that total return,” according to Globa X. “The EV/EBITDA valuation went up nearly three multiples, showing that much of the rally was due to a valuation expansion based on investor demand rather than fundamental improvements in their investments.”

International REITs, including some SRET components, may offer diversification benefits as individual property sectors behave differently from one country to another due to different economic and local circumstances. International real estate has generally demonstrated imperfect correlation relative to U.S. real estate over time, which has led to lower volatility and potentially greater risk-adjusted returns.

“Given the surge in REIT prices, valuations on the broad asset class are stretched, with REITs now trading 12% above their 10-year long term EV/EBITDA average,” said Global X.

For more on alternative strategies, visit our Alternatives Channel.