You are at:Home»Alternatives Channel»Factor Timing or Factors All the Time? 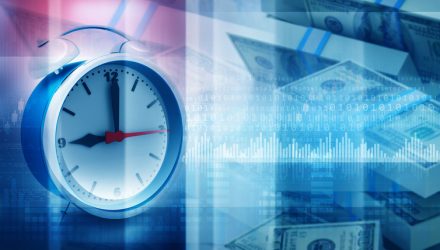 Factor Timing or Factors All the Time?

Factor timing is an appealing concept. But as with any active strategy, the right decision tends to look much more obvious in hindsight.

Most investors were caught off guard by the sudden reversal of factor performance at the beginning of September. It was hard to even pinpoint the exact reason for the reversal in factor leadership after the fact—some rosier-than-expected economic data and a possible thaw in the U.S.-China trade war are the most likely explanations.

The MSCI USA Enhanced Value Index (factor: value) lagged the broader MSCI USA Index by 688 basis points (bps) to start the year through September 5. This was followed by a remarkable 343 bps of outperformance over just a handful of trading sessions.

A similar reversal was seen with smaller stocks (factor: size) that lagged earlier this year.

Many investors have been asking whether this rally really has legs and if now is the time to tilt into value or small caps.

Focusing on small caps—those stocks most sensitive to economic growth—exchange-traded fund (ETF) flows have shown some investor conviction: the largest small-cap ETF took in $1.3 billion on September 16, its largest daily inflow since September 2018.

For tactical investors, perhaps small caps have been oversold for the past 12 months on overly pessimistic expectations for a global recession, and this performance reversal and these flows could indicate a good entry opportunity.

But strategic asset allocators with a longer time horizon are right to be more measured in response to catalysts like a few days of good performance and inflows. We have to dig deeper to find a compelling investment opportunity.

Many market participants (WisdomTree included) have commented that since we are “late cycle” in the bull market in U.S. equities, now is the time to favor factors such as momentum and quality, and dial down exposure to those like value and size. This call has by and large been spot on.

But most investors would be best suited to take the advice of AQR’s Cliff Asness on such market-timing: “Sin a little.”1 It is very difficult to know what stage of the market cycle we are in until after the fact—history tells us that 10 years without a recession makes the economy due for one soon, but that’s no guarantee.

For investors with long-term goals and return objectives in mind, elevated valuations and above-average returns of large-cap U.S. equities over the past decade make valuation contraction and lower returns ahead more likely.

And for investors using single-factor strategies to be over-weight in more richly valued defensive factors such as minimum volatility, achieving return objectives may be even more difficult.

Attractive relative valuations for small caps are giving investors a nice cushion relative to large caps. This is the type of valuation opportunity to which investors want to pay attention, particularly for those more reluctant to be over-weight in discounted international equities. 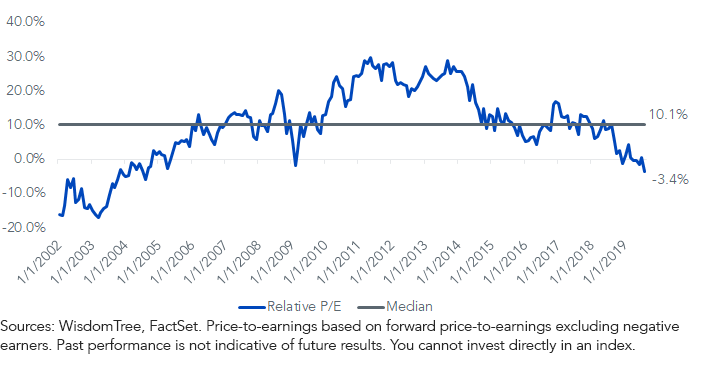 As earnings have turned negative for small caps in the first half of 2019 and recession probabilities have risen, small-cap value suffered dearly relative to growth. This trend has been a drag on the performance of more value-tilted small-cap indexes, such as the WisdomTree U.S. SmallCap Index.

For investors who can withstand the short-term fluctuations of small caps and have a long time horizon, the discounted valuations of small-cap value are attractive.

Some say the worst-case scenario has not yet been priced in for small caps. But consider the alternative: perhaps the best case is still priced in for large caps, which sit near all-time highs, and explains why small caps are priced at the least-expensive relative valuation since the mid-2000s.

When looking at WisdomTree’s earnings-weighted Indexes, the price-to-earnings (P/E) discount of small caps is even more pronounced. The WisdomTree U.S. SmallCap Index has a P/E of 11.0x, which puts it at a 22% discount to its historical median and in the bottom decile of its range of historical valuations.

Compare this with the S&P 500 Index P/E of 17.5x, which puts that index’s valuation in the top quintile of observations back to 2007, and a nearly 60% premium to WisdomTree’s small-cap Index.

1Clifford Asness, Antti Ilmanen and Thomas Maloney, “Back in the Hunt,” Institutional Investor, 11/11/15.