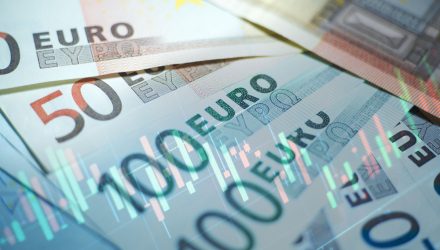 The euro-related exchange traded fund rallied Thursday, with the euro currency enjoying its longest winning streak against the U.S. dollar since 2013, as the European Central Bank expands its bond purchasing program.

The Invesco CurrencyShares Euro Currency Trust (NYSEArca: FXE), which tracks the euro currency against the U.S. dollar, advanced 1.0% on Thursday.

The euro was trading up 1.0% to $1.135 and was on its best consecutive winning streak against the greenback since December 2013.

The EUR surged after the ECB said it would increase its Pandemic Emergency Purchase Program by €600 billion, or $673 billion, to purchase as much as €1.35 trillion in eurozone government and corporate debt through June 2021, the Wall Street Journal reports.

The larger-than-expected expansion in the program is “a good clear message from the ECB that they are willing to go above and beyond to continue market functioning and restart growth,” Derek Halpenny, head of research for global markets in the European region at MUFG Bank, told the WSJ.

The ECB also revealed it would reinvest principal payments from maturing bonds bought through the end of 2022, which could allow the central bank to deviate from its guidelines governing the proportion of bonds it is allowed to hold from each member country, according to Pictet Wealth Management.

Investors interpreted the supportive actions by the eurozone’s central bank as another point of optimism after a recent proposal led by Germany and France to issue centrally backed bonds, which may help address financial divisions across the eurozone. If the proposal is accepted by all 27 EU members, it would provide grants and loans to the countries suffering the most from the economic fallout due to the coronavirus pandemic.