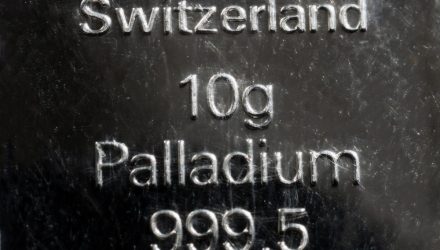 Palladium is one of the most available platinum metals and occurs in Earth’s crust. It is typically produced commercially as a by-product in the refining of copper and nickel ores. Russia, South Africa, Canada, and the United States were the world’s leading producers of palladium in the early 21st century.

A precious gray-white metal, palladium is not tarnished by the atmosphere at standard temperatures. As a result, the metal and its alloys can be used as substitutes for platinum in jewelry and in electrical contacts; the beaten leaf is also used for decorative purposes. The metal’s most prominent use is in industrial arenas however.

For investors looking for a Palladium ETF, as the metal must be traded on the commodity exchange otherwise, the Aberdeen Standard Physical Palladium Shares ETF (PALL) is worth a look.

Aberdeen Standard Physical Palladium Shares ETF (“the Shares”) are issued by Aberdeen Standard Palladium ETF Trust (“the Trust”). The investment objective of the Trust, Symbol: PALL, is for the Shares to reflect the performance of the price of palladium, less Trust’s expenses. The Shares are designed for investors who want a cost-effective and convenient way to invest in physical palladium.

Tom Lydon, CEO of ETFTrends.com, discusses some of the industrial uses of the metal, and how the clean air sector naturally segues into a discussion of palladium and it’s benefits.

“When you think about clean air, palladium is used in many components of clean air technology. It’s also used in catalytic converters. And for a long time there, a lot of citizens around the world were having their cars work for them longer. In fact, I just saw about 6 months ago in USA Today, in the U.S. we are keeping cars the longest we ever have. I think it was something like 8 years. The average car on the street was at least 8 years old. But eventually we need to get new cars. And the new cars that are coming onto the market are more energy efficient. And the more energy efficient cars happen to use more palladium. So that’s just one of those things. So when you think about catalytic converters for reducing key pollutants, palladium is one of those key components,” Lydon explained.

Like gold, the precious white metal has also been appreciating recently.

Palladium has a clear-cut trend in place, according to Lydon.

“Palladium is offering up it’s own trend, and it’s own trend for specific reasons. And when you think about that, if you’re an investor and you like ETFs, and you’re looking for areas that may have their own trendlines, this may be one area to take a look at,” he said.

Finally, palladium may offer diversification to investors concerned about the too much equity market exposure.

“If you feel like the domestic equity markets are a little bit long in the tooth, and you’re looking for other areas that have underperformed in the last 5 years, definitely precious metals would be one of those categories. And that might be an opportunity when you look back on the financial crisis in the last recession, precious metals did pretty well. So there’s definitely a diversification aspect to this,” Lydon said.

One caveat given the volatility of palladium, as it is a commodity, is to be vigilant about revisiting it periodically.

“Make sure you keep an eye on that trendline,” Lydon cautioned.