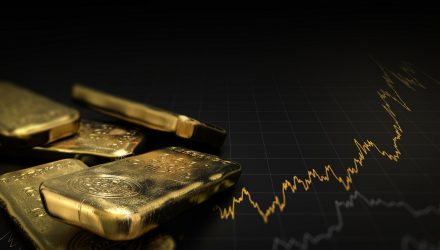 While gold prices have backed off some after posting solid gains recently, peaking at $1,422.85 on June 25, some analysts are predicting a rally to $2,000 per ounce by the conclusion of 2019.

After a lethargic several years, gold futures blasted above their near six-year high, topping the key level of $1400 per ounce for the first time since 2013. The gold futures market notched a 6.5% gain in the month of June after a 1.6% move in May. Collectively this represents the greatest subsequent monthly gain in the gold market since the January to February 2017 era, when the yellow metal rose more than 8%.

Gold ETFs are pushing to upside amid increased expectations of a U.S. rate cut, even as some investors locked in profits from bullion’s recent rally. Gold is believed by many investors to be inversely correlated with interest rates. Rising interest rates make bonds and other fixed-income investments more attractive, so money will flow into higher-yielding investments, such as bonds and money market funds, and out of gold, which offers no yield at all during times of higher interest rates.

With much uncertainty about the Fed lowering interest rates, in part from last Friday’s positive jobs report, which might have reinforced some of the Fed hawks’ impressions that things are humming along in the economy, gold investors have taken a bit of a breather. However, most analysts see the Fed as likely to raise rates, with a 99% likelihood of a rate cut based on the CME FedWatch Tool. The lustrous metal has also received a boost from the prospect of more potential easing monetary policies from other major central banks. A combination of global growth concerns, rising oil tensions and looming war possibilities with Iran, as well as  generalized geopolitical tensions have also spurred demand for safe haven assets like gold and bonds.