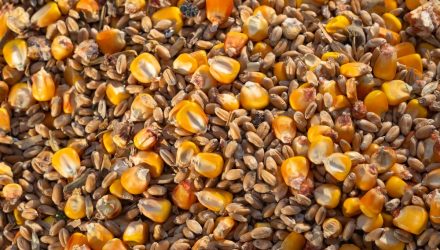 Wheat futures climbed on Monday as an escalating Russia-Ukraine war threatened the harvest outlook in Ukraine, a large global exporter of grains. Russia appears to be gearing up for another offensive with the war expected to carry through the summer, while Ukraine has vowed that it will not surrender. With an extended conflict, there are growing concerns over how many acres of wheat will be planted this season.

Ukraine’s armed forces command has pointed to signs that Russia is beginning an anticipated new offensive in the eastern region of the country and is potentially raising the intensity of attacks in the areas of the Donetsk and Kharkiv regions, Reuters reports.

Ukraine’s next corn crop could even decline by almost 40% year-over-year, Bloomberg reports.

Furthermore, the rising prices of fertilizers due to the war have also forced farmers to plant more soybeans than corn for the third time ever.

Meanwhile, corn futures are advancing, with futures topping $8 per bushel for the first time in a decade, on inclement weather.

“We are not seeing a lot of warm temperatures and soil temperatures are not coming up as fast as they should. This will be a problem in May, if this trend continues,” David Tolleris, owner of WXrisk, said in a report.

Planting is off to a slow start, with 2% of the crop seeded as of April 10, compared to the five-year average of 3% for this time of the year.