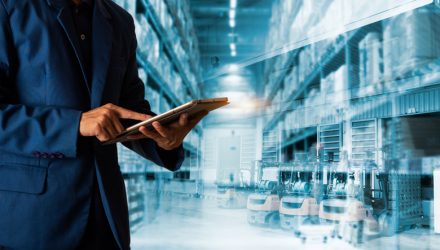 Commodities ETF Sell-Off May Be a Buying Opportunity

The recent trade-induced pullback in the commodities space may be a short-term, risk-off event that exchange traded fund investors can capitalize on.

Goldman Sachs Group analysts including Sabine Schels argued that while rising macro concerns and escalating trade tensions have weighed on metals and agriculture prices, backwardation and a positive carry in the commodities market are beginning to offset those risks, Bloomberg reports.

The analysts pointed out that the benchmark S&P GSCI commodity index is showing positive roll returns for the first time in eight months, and the bank is projecting a 3-month return of 6.1%.

In the wake of an escalating trade war between the U.S. and China, investor confidence in the global economy has waned as higher trade barriers diminish efficient productivity, dragging down on commodities prices. The S&P GSCI Enhanced Commodity Total Return Index declined about 4% this week and was heading toward its biggest loss since December as the U.S. considers blacklisting five Chinese companies in an escalation of trade tensions.

However, Goldman cautiously views the recent pullback as a buying opportunity. The bank argued that an eventual trade deal between the two largest global economies as more likely than not, which would lift demand for cyclical raw materials and commodities in the second half.

Meanwhile, on the supply side, tightening physical supplies for crude oil to live cattle and zinc is creating positive carry for rolling over futures contracts at expiration, which typically occurs in a backwardated market where later dated contracts look cheaper than near-term or expiring contracts.

“Zinc backwardation has steepened on sharp inventory drawdowns, even though prices have dropped recently, while the petroleum product markets have tightened on refinery outages,” Goldman said. “Combined with modest near term spot price upside, the risk-reward thus reinforces adding length despite the current macro-induced volatility. This positive energy carry contributes to our expectations of positive commodity returns near-term.”

Investors who are interested in the commodities space can look to broad commodity ETF plays to gain exposure to the asset class. For example, the Goldman Sachs Connect S&P GSCI Enhanced Commodity ETN (NYSEArca: GSC) is an obvious choice since it tracks the S&P GSCI Enhanced Commodity Index that the bank is basing its projections on. Additionally, the iShares S&P GSCI Commodity-Indexed Trust (NYSEARCA: GSG) also tracks the benchmark.

The underlying benchmark is comprised of a diversified group of commodities futures, with a heavy 62.6% til toward energy, followed by 15.4% agriculture, 10.1% industrial metals, 7.5% livestock and 4.4% precious metals.