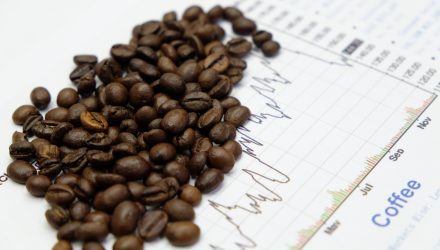 Any near-term upside to be accrued by the iPath Series B Bloomberg Coffee Subindex Total Return ETN (NYSEArca: JO) and other coffee-related exchange traded products will have to be driven by demand factors because data confirm global supply is robust.

That despite Brazil, the world’s largest producer of the commodity, being one of the worst-hit countries by the coronavirus pandemic.

“Global coffee supplies are still expected to be plentiful this season, despite a drop in production in 2019/20. World coffee production may fall to 167.2 million 60-kilo bags in the current crop year, down from a record 175.3 mln the year before, according to IHS Markit forecasts.”

Production slumps in one coffee variety will be offset by increases in another.

“Arabica output is seen dropping to 96.3 mln bags from last year’s 107.6 mln. In contrast, robusta production may rise to a record 70.9 mln bags in the new season from 67.7 mln a year earlier, which had been a record itself,” notes IHS Markit.

Coffee is one of the most volatile commodities and JO reflected as much in 2019 with plenty of supporting evidence in recent weeks.

“Brazil’s coffee production fell to 57.1 mln 60-kg bags in 2019/20 from a record 64.8 mln a year ago, which was still the highest ever for an off-year,” according to IHS Markit. “Even though arabica production fell to 39.1 mln bags from 48.7 mln due to the biennial tree cycle, the downturn in overall production was dampened by a rise in robusta production to 18.0 mln bags from 16.1 mln. Attention with regard to Brazil is already on the current 2020/21 crop. While some early predictions put the crop in a range of 70-75 mln bags, trees were hit by a series of weather-related strikes, including frost last July and dry weather in recent months. That said, IHS thinks that the crop may reach about 65-68 mln bags.”

“Fundamentally, coffee production has been in reverse gear in 2019/20 but the drop is by no means sufficient to put the market on a better footing,” says IHS Markit. “In fact, coffee production in 2019/20 is not only the highest ever in a Brazilian off-year but also the second-highest ever after the record 2018/19 harvest. This is not least the case because Vietnam produced its biggest crop ever, third-ranked Colombia’s output is seen largely flat, while Indonesia and Uganda are experiencing massive increases in output.”