You are at:Home»Alternatives Channel»China’s Voracious Appetite Could Support Agriculture ETFs in 2020 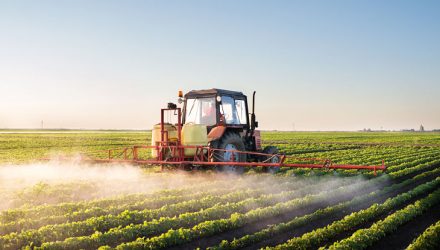 As the U.S. and China move toward resolving their trade differences, the increased Chinese demand for agricultural goods could help lift some commodity prices and related exchange traded funds.

“Both sides are clearly betting that agricultural price inflation will take hold at some point, which will help both sides claim success with achieving the upward end of price projections,” Sal Gilbertie, President, Chief Executive Officer, Chief Investment Officer and Founder, Teucrium, said in an email. “Teucrium projects $31 billion of U.S. agricultural imports by China in 2020, rising to $38 billion in 2021 and $44 billion in 2020, all assuming today’s prices.”

Teucrium believes China will only buy as much of any agricultural product as they require. Based on China’s annual GDP growth rate, the emerging economy’s needs have increased about 16% since the previously calculated 2017 baseline of $24 billion to $28 billion.

In the meantime, China is expected to immediately buy beef, pork and soybeans, with special focus on soy. The country will need to rebuild stocks of soybean in 2020, and demand is expected to rise as China’s swine herd repopulates in the years ahead.

“China has probably drawn down its domestic soya reserves during the trade dispute, which means it will likely increase its purchases of soybeans from the U.S. immediately upon commencement of the agreement,” according to Teucrium.

Additionally, both the U.S. and China know that any rise in agricultural prices will push dollar volumes toward their most ambitious goals.

“It is our belief that negotiators are betting on what they see as the inevitable, i.e., agricultural price inflation, caused by relentlessly rising demand and potential production disruptions due to climate/weather or other unforeseen forces,” Gilbertie added.

China is the preeminent consumer of soybeans, buying over six of every ten bushels of soybeans exported globally. Of the projected $31 billion in Chinese exports expected for 2020, soybeans could make up $14 billion. The one-time replenishing of soybeans could help soy prices surge this year. The long-term outlook will more reliant on the country’s needs to feed animal herds, like repopulating swine herds, and its growing human population that has heavily favored pork meats.

Corn could also receive a boost from China as it is the second largest producer and consumer of corn in the world.

“China has in the past been a large buyer of both sorghum and distillers grains; we believe that China’s appetite for the entire coarse grains category will continue to increase,” according to Teucrium.

Lastly, TAGS is seen as a catch all, fund-of-funds ETF that includes exposure to CORN, WEAT, SOYB and CANE.