You are at:Home»Alternatives Channel»Big Energy Stocks Improved In Q2, But There’s Still Work to be Done 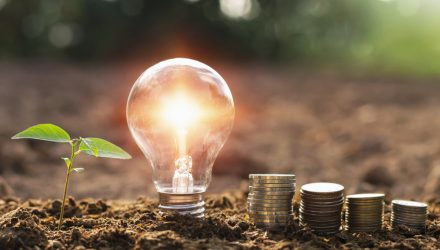 Big Energy Stocks Improved In Q2, But There’s Still Work to be Done

The Energy Select Sector SPDR Fund (NYSEArca: XLE) is coming off an impressive second-quarter showing, but traditional energy stocks still have plenty of work to do to reclaim pre-coronavirus highs.

“U.S. leaders Exxon Mobil Corp. and Chevron Corp. saw their market capitalization recover by 17.7% and 23.1%, respectively,” reports S&P Global Market Intelligence. “Still, the gains did not offset losses incurred in the first quarter, when Exxon’s market cap dropped by 45.6% and Chevron’s fell by 40.0%. Both companies spent the second quarter tightening their belts as Exxon said it plans to cut its U.S. workforce by up to 10% by the end of the year and with Chevron saying it could lay off up to 15% of its global workforce in the coming months.”

Dow components Exxon and Chevron combine for about 40% of XLE’s roster.

There are lingering concerns over demand and the overall strength of the energy market. The demand outlook has weakened after more than 25,000 new coronavirus cases were reported on Saturday in the U.S. where over 2 million have now been infected. Meanwhile, China reported a spike in cases in Beijing where lockdown measures may be reinstated.

“A handful of oil and gas leaders moved up in market cap rankings,” according to S&P Global Market Intelligence. “Oil refining giant Marathon Petroleum Corp. shifted three spots higher from the first quarter to 18, while Phillips 66 moved to spot 13 from 15. Occidental Petroleum Corp. rounded out the top 25 after listing in 27th place last quarter, placing its market cap at nearly $16.5 billion, down from close to $38 billion at the same time in 2019.”

“While oil companies expect a slow recovery for global oil demand, WTI prices have continued to climb since the end of March, recovering nearly 92% during the second quarter from $20.48 per barrel on March 31 to $39.27/bbl upon the June 30 closing,” reports S&P Global.