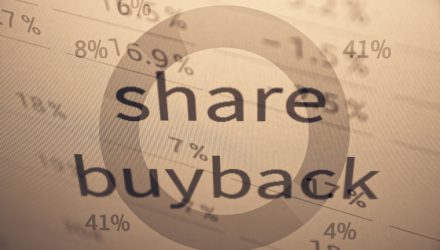 With the energy sector ranking as the best-performing group in the S&P 500 again this year, investors are being rewarded, and in some cases, strong returns are being enhanced by stout dividends.

For example, the Virtus InfraCap MLP ETF (NYSEArca: AMZA) is higher by almost 29% year-to-date while yielding an impressive 7.95%. However, there’s more to the midstream energy shareholder rewards than just big dividends. That includes buybacks.

Energy infrastructure companies, including some AMZA components, have increasingly strong balance sheets and are generating more cash, enabling those firms to pay and grow dividends while also repurchasing their own shares.

Some familiar names among master limited partnerships (MLPs) showed commitments to buyback efforts in the first three months of 2022.

“Several companies across the energy infrastructure landscape were active with their repurchase programs in 1Q22, albeit at mostly modest amounts. Leading the way, MPLX (MPLX) spent $100 million on repurchases in the quarter. Targa Resources (TRGP) and Magellan Midstream Partners (MMP) both spent $50 million on buybacks, while Cheniere (LNG), EnLink (ENLC), and Plains All American (PAA) repurchased approximately $25 million of their equity,” added Morris.

That’s relevant to AMZA investors and those considering the fund because the ETF isn’t just actively managed, it’s concentrated. Its top three holdings combine for about 48% of the fund’s roster. That includes Magellan Midstream and MPLX, which combine for almost 32%.

“One of the most poignant changes for midstream investors may be the proliferation of buyback programs, particularly given a history of frequently tapping equity markets to fund growth projects. The evolution of midstream/MLPs from frequent equity issuances to self-funding equity to now buying back equity marks a notable transformation,” concluded Morris.